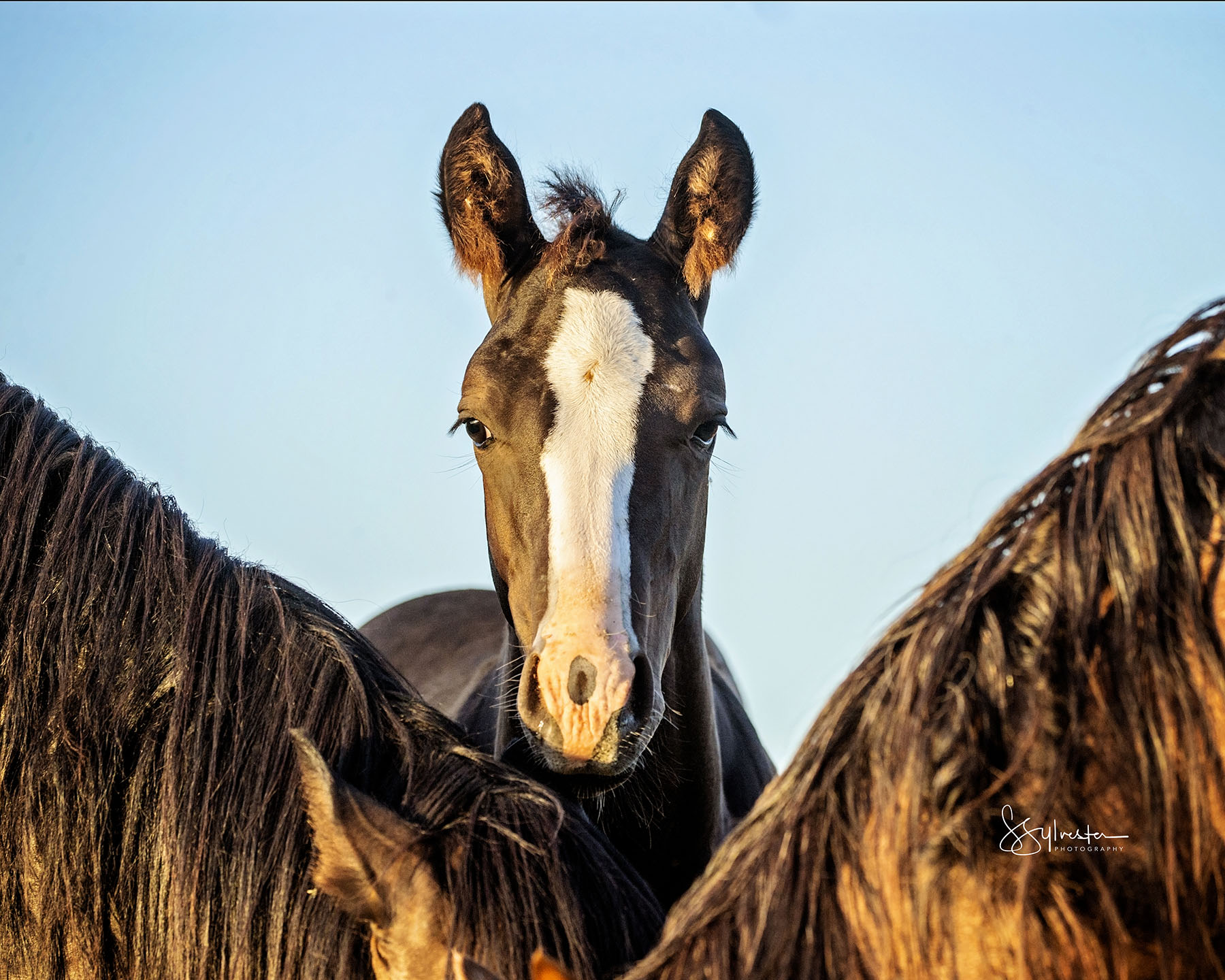 Dr. Glenn Blodgett, horse division manager and head veterinarian
for The Four Sixes Ranch in Guthrie, Texas, explains how every
mare owner can have a successful breeding season.

Hearing that a mare has successfully conceived can mean incredible excitement for a mare owner – especially for the first-time breeder. Imagining the future foal’s potential, waiting for the birth, and that first look at the baby are the next steps.

But what if the breeding doesn’t work the first time? Or the second? The costs of the veterinarian, mare care and shipping semen can add up.

You may not have hundreds of mares like The Four Sixes, but Blodgett notes that every mare owner can increase the odds of conception – and lower the total cost – with a few easy steps.

Breeding to a less fertile stallion can lessen the chances of conception.

There are many factors that go into choosing the right stallion, but after all other needs are met, the stallion should have the reputation of being a good and fertile horse. “Most stallions have reasonably good fertility, but occasionally, you’ll have one that’s difficult,” Blodgett said. “If you’re trying to breed – especially with shipped semen – you need to take that into consideration.”

Another consideration is the popularity of the stallion and the time of year the mare owner wants to breed. If the stallion is particularly popular and the desired time frame for breeding is during a peak part of the season, the stallion might be under a lot of breeding pressure.

“The best thing to do is be prepared and ask the stallion manager questions. It’s OK to ask how well a stallion ships, if he’s under breeding pressure and about semen availability. The mare owner can get an idea of how far ahead they need to make their breeding request, and can let their vet or mare manager know what they have to work with,” Blodgett said. “At this time, also get information you’ll need later – what the breeding and shipping days are and how you’re going to ship semen. This is all important stuff to let your veterinarian or mare manager know.”

According to Blodgett, the main priority for any mare owner is to have a mare that is healthy. “The simple thing is to make sure they can’t see the mare’s ribs. If you can see the ribs, they’re too thin.”

Body condition is important because the mares are going to cycle better – increasing the chances of conception. “Some mares – especially if they have a foal and are thin – will shut down their cycle and won’t cycle right back,” Blodgett said. He adds that it is very important to have a bred mare in good body condition before she has her foal because “it is easier to put weight on them before they foal.”

Luckily, the industry’s advances and the competitive nature of feed companies means that most of the feed available is healthy and balanced. “A horse is a grazer, and the pasture or roughage source determines what supplement they need from feed – but most require something. The mares can get the nutrients they need in lots of different forms. It doesn’t matter if it’s by pellets or a textured feed, as long as they get the nutrients,” Blodgett explained.

A mare can’t get bred until she is cycling regularly. If a mare owner breeds later in the year, the mare will typically come into season naturally. If an earlier breeding is desired, the mare’s cycle may need a kick-start.

“Using lights is important for breeding earlier in the year – especially in January and February and even March,” Blodgett said. “Lights consist of having the mare shut up in a stall or pen where the entire area is lit well enough to read a newspaper in. We turn our lights on around 4 in the afternoon, so it never gets dark where the mare is, and then leave them on until 10 at night. I suggest the mare being under lights for at least 60 days.”

Some people assume that a bred mare will immediately begin cycling after foaling with her “foal heat,” but Blodgett is adamant that is not the case. “Some mares, if they have a foal early – particularly in the first two months of the year – will not come back in heat like she’s supposed to, and one way to prevent that is lights. That, and good body condition, are the two most important things to get them to cycle normally after foaling early,” he said.

But what about the “shot?” Can’t the vet give the mare a shot to start her cycle? “There are several hormone therapy regimens that can be used on a mare that does not cycle normally – but the mare has to meet some requirements. It’s common to have a mare that is not cycling at all, and the owner asks, ‘Can’t we give that shot?’ If she’s not cycling, then time is about the only thing you have,” Blodgett explained. He reiterates, “To prevent that is the best thing, and you can do that with lights and good body condition.”

“The research that we’ve done from breeding a lot of mares shows that with shipped semen you get a lower conception rate,” Blodgett said. “What is factored in there is that you have a lot of different levels of experience with breeding mares. If a mare owner gets his mare in the hands of someone who has experience, then the mare is more likely to get bred.”

Dr. Blodgett suggests that mare owners ask about their current veterinarian’s level of experience. “They just need to ask if the vet is someone that they can call to help breed the mare. In the case of cooled transported or frozen semen, they need to ask if it’s something the vet commonly does. If they’ve never done it, the mare owner needs to consider finding someone with experience. They can ask around and get recommendations.” Blodgett added, “I’m not saying that someone who’s never done it can’t, but if they have experience, the owners are better off.”

If a mare owner is planning to breed a maiden mare, he might opt to have the mare checked for breeding soundness. However, prior to the mare starting her cycle, the most a veterinarian can do is make sure she has all the right parts. “If they’re not cycling, it’s difficult to get a true read. The vet can make sure there’s nothing abnormal, and then make a better assessment of what is going on once she starts to cycle,” Blodgett said.

And it’s always advisable to have a mare with foal checked within a couple of days after the foal is born to ensure that the mare is healthy to breed again and that there are no foreseeable problems.

Blodgett discourages mare owners from trying to get a mare bred during her foal heat. He added, “In general, if you want the mare to get and stay pregnant, it’s better to let them go through their foal heat and come back in.”

For open or maiden mares, the owner first needs to determine if the mare is cycling. The vet can identify if she is or isn’t. “If she’s not, the owner can take her home and bring her back in a couple weeks. There is no reason to continue paying for mare care if she’s not close to cycling. They can check her again later. At that point, if she is cycling, then we can give her the shot to bring her back in quickly if that is what the owner wants,” Blodgett said.

If an owner doesn’t mind having a foal a little later in the year, a more economical option is to watch the mare for signs of being in heat. Although some mares are “silent” when they’re in heat, most will show several signs. “This is a useful tool. The mare can be in a pen by geldings – it doesn’t necessarily have to be by a stud. Symptoms of a mare being in heat include squatting and looking like she’s trying to urinate, leaning against the fence, standing with her tail in the air and the mare’s vulva will be ‘winking.’ Or, sometimes they’ll just stand really close to the fence and won’t leave,” Blodgett said. “If an owner sees these actions, it’s time to go get the mare checked.”

On average, a mare cycles every 21 days. If an owner misses the cycle, he can start checking again around day 14 after ovulation. “You don’t want to wait until day 21 because you’ll miss it again. If you’re not sure when she ovulated, you need to check a little earlier.”

A mare can be checked for pregnancy at about two weeks post-breeding. “If we know when the mare ovulated to the day, we can check 13-14 days later. You can tell a little quicker but that’s when we do them. That gives you plenty of time to catch the next cycle,” Blodgett said. “I think the main thing for owners to remember is to have the mare in good shape, make a good decision about a fertile stallion, have a good vet, and don’t breed on a foal heat unless it’s important. The other thing for owners to remember is that the mare will most likely have another cycle, and they can try again.” ★