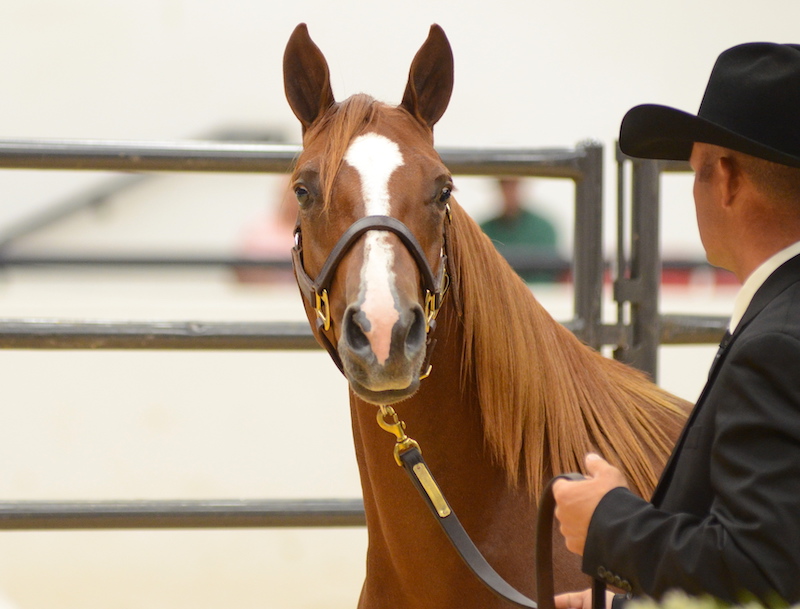 A young broodmare from a family of noted Western performance producers topped this year’s National Reined Cow Horse Association (NRCHA) Snaffle Bit Futurity Sales. She was one of three horses who topped six figures during the event held by Western Bloodstock Ltd.

Sale officials say the average price from this year’s NRCHA Futurity Sales was up 30 percent from last year.

The high seller at $105,000, Desires Cricket is a 2015 mare by late EquiStat Elite $49 Million Sire Dual Rey and out of Playguns Desire (by Playgun). Paul Inman had the top bid.

Though the mare consigned by Alan Chappell has no show record of her own, she is a full sister to National Cutting Horse Association (NCHA) Super Stakes Derby Open Champion and Classic/Challenge Open Champion Reys Desire, who won $409,851 during her show career and has so far amassed an EquiStat produce record of than $482,895.

In addition, her mother, Playguns Desire, also is a half-sister to producer Desire Some Freckles (by Freckles Playboy), whose foals have won more than $1.6 million.

Desires Cricket sold in foal to Reyzin The Cash. According to the sales catalogue, she’d previous produced colts this year by Badboonarising and last year by The Animal.

Click here for hip-by-hip results from the sale, including buyers, sellers, pedigree, price.

Two yearlings tied for top honors at $100,000 each: Mighty Fine Talker and This Katty Lady.

Bought by Teton Ridge, who earlier this year purchased his sire, Mighty Fine Talker is a half brother to the winners of more than $233,825. His leading money-earning sibling is NCHA Futurity Open Reserve Champion Some Like It Hott ($183,223, by Spots Hot).

The other yearling to bring $100,000 was This Katty Lady, a daughter of WR This Cats Smart and out of Shiners Diamond Lady (by Shining Spark) who sold to Clinton Marshall. The mare consigned by Wagonhound Land & Livestock, LLC, is a full sister to 2018 NRCHA Derby Open Champion Shiners Diamond Cat ($142,706).

The top-selling 2-year-old at this year’s NRCHA Snaffle Bit Futurity Sales was Sweet Metallic Cash, a daughter of Reyzin The Cash who brought a bid of $85,000 from Brent Steward, of Rocking BS Ranch.

The filly is out of Sweet Mystic Metal, a daughter of Metallic Cat and out of EquiStat Elite $2 Million Dam Sweet Abra (by Abrakadabracre). Sweet Mystic Metal is a full sister to the earners of nearly all of Sweet Abra’s prestigious produce record, including National Cutting Horse Association (NCHA) Open Horse of the Year Metallic Rebel.

“Her breeding is what really spoke loud to us for down the road [as] a future broodmare,” he said.

The filly will be sent to Rocking BS’s trainer, Lance Johnston, and embark on a show career before hopefully one day joining the ranch’s broodmare band.

Rocking BS has been assembling a mare herd for its two stallions, 2019 NRCHA Snaffle Bit Futurity Open Champion Here Comes The Boon and Annies Smart Cat, a son of WR This Cats Smart who was the 2020 NRCHA Open Hackamore National Champion.