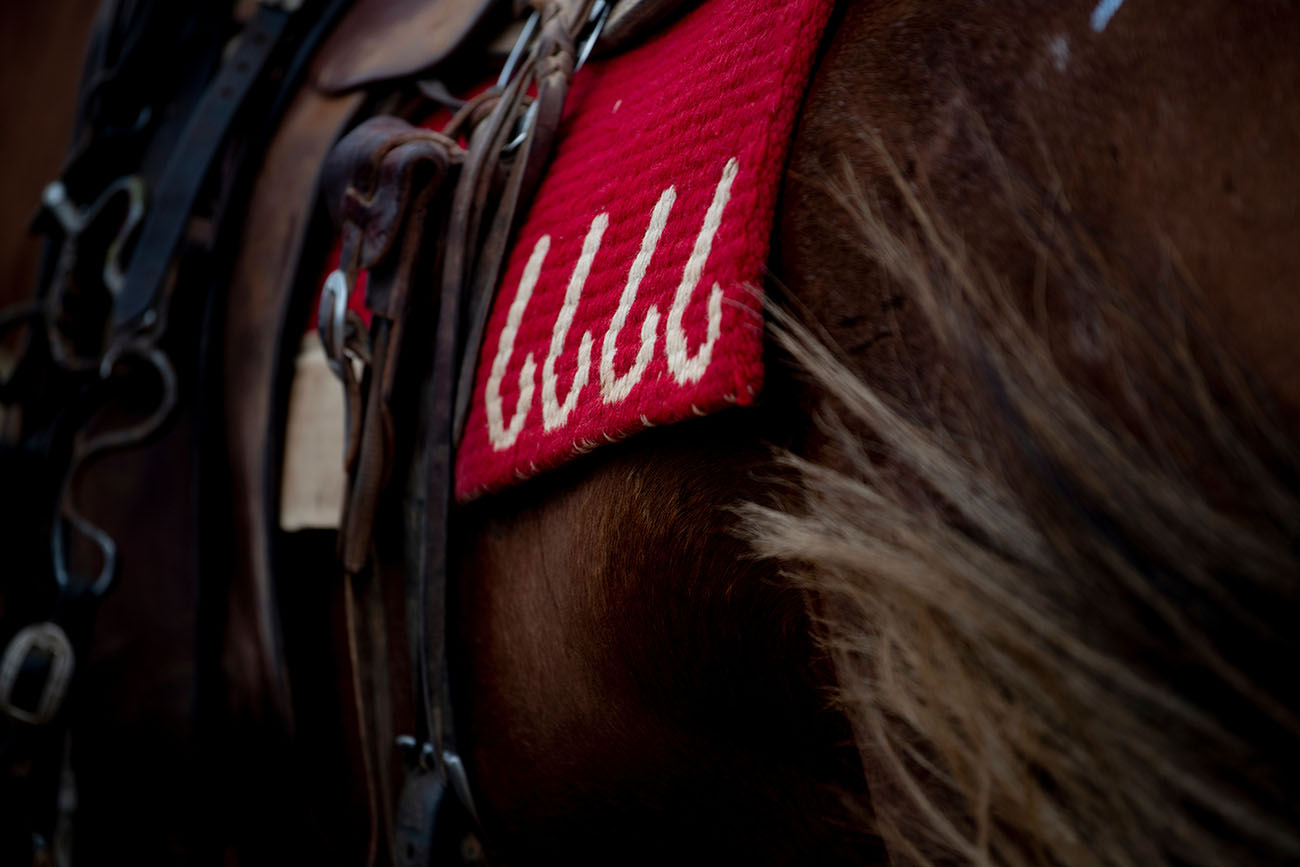 American Quarter Horse Association (Amarillo, Texas), December 5, 2019 — The historic Four Sixes Ranch at Guthrie, Texas, hosted an AQHA Ranching Heritage Challenge on November 2 at its facility, offering exhibitors a unique opportunity to visit the ranch, which is an AQHA Best Remuda winner and home to top ranch horses, cattle and some of the industry’s best stallions.

The Sixes were good hosts, with not only food and fun, but also a full menu of classes for competitors.

The bay roan stallion is a homebred for the AQHA Best Remuda-winning ranch based in Vernon, Texas. He is by Pocket Fulla Pepto and out of the Double My Whiskey mare Wanna Be Blonde.

Wanna Be A Pepto’s dam is a sibling to horses that have earned more than $276,000 in National Reining Horse Association earnings, as well as world champion Whata Chic Magnet (by Magnum Chic Dream). They are all out of the producing mare Im Not Blonde.

Finishing second in the open class was Ben Baldus aboard his own Shes Tuff N Smooth (Woody Be Tuff-CR Shes Uh Secret by Peptoboonsmal), a sorrel mare bred by Center Ranch of Centerville, Texas.

The 6-year-old red roan gelding was bred and is owned by the ranch, and is by Bet Hesa Cat and out of the Sixes Pick mare Pickin Tivio. They earned $1,170 for the victory.

Pickin Tivio is a money earner, and she and her siblings earned nearly $40,000. Pick Your Bet is a half brother to money earner W Pasture.

The 6-year-old red roan stallion is bred and owned by Tongue River Ranch. He is by Cats Hillbilly and out of the Pepcid mare TRR Ms Pepcid Poco. They earned $1,300 for their victorious run.

$2,000-Added Cowboy Working Ranch Horse
The extremely competitive cowboy class had the deepest field and the second-highest score of the day’s cow work, won by WR Gin and Cole Hatfield with a 144, just a half point off the day’s overall highest mark. They won $1,340.

WR Gin is a 4-year-old gelding bred and owned by Burnett Ranches. He is by WR This Cats Smart and out of the Paddys Irish Whiskey mare Paddys Gin. The pair has already been winners in a previous Ranching Heritage Challenge this year.

Garrett Cooper and Wanna Be A Pepto came off their 4-year-old class wins to finish second in this class, earning an additional $1,005 to bring their day’s earnings to $4,725.

$2,500-Added Amateur Working Ranch Horse
The runner-up in the limited 5- and 6-year-old class was the winner in the amateur class.

TRR Tanquery Cat is a 6-year-old gray gelding bred by Tongue River Ranch, and the Winderses acquired him last fall. He is by the ranch’s Cats Hillbilly and out of the TRR Big Iron mare TRR Sweet Shoot Out. They earned $1,550 for their win.

Dunkel and the W.T. Waggoner Estate-bred Bobbie Can Do (Cat Man Do-Bo Bobbie Socks by Mr Sorrel Bo) were second, a half point back.

TS Paddy Shota Spark is a 13-year-old gelding bred by Una M. Crowley-Ford of Chinook, Montana. He is by Paddys Shota Merada and out of the Shining Spark mare Knot A Shabby Shiner.

The pair also won the Level 1 division of the class.

The Weatherford, Texas resident bought the 5-year-old mare from breeder and AQHA Best Remuda winner Stuart Ranch in August. The palomino mare is by CD Lights and out of the Genuine Doc mare Seven S Genuine Miss.

TRR Mr Roansome Dove is a 7-year-old red roan son of Pepcid, out of the Freckles Playboy mare TRR Playboys Dove, and has Ranch Horse Association of America earnings. He is a sibling to two other money earners, TRR Colonel Pep and TRR Pepcids Lil Dove.

The youth class was a perfect storm of cleverly named horses, as finishing second was Doc Hollibay and third was Dee Marcus Hair, both horses bred by Tulia, Texas-based Billy Cogdell, and owned by Jack Brooks of Quitaque, Texas.

Finishing second in the Level 1 was Rockin To Play (Rockin W-Your Turn To Play by Playin Stylish), ridden by Spur Leathers for breeder-owner Burnett Ranches LLC.

The 4-year-old Center Ranch-bred mare is by Woody Be Tuff and out of the Peptoboonsmal mare CR Shes Uh Secret, and Baldus, who is based in Bowie, Texas, acquired her in the spring of her 2-year-old year.

She is a sibling to the earners of more than $30,000 in competition, and is herself a money earner in both ranch-horse and reined cow horse competition.

$1,000-Added Amateur Ranch Riding
Narrowly defeated in the working ranch horse class, Sidney Dunkel and Bobbie Can Do roared back to dominate the amateur ranch riding, marking an eyebrow-raising 79 and earning $372.

The Archer City, Texas, resident bought her 9-year-old W.T. Waggoner Estate-bred gelding in 2012 and has guided him to multiple Versatility Ranch Horse world championships in both the youth and amateur divisions.

Megan Ciana and Blues Wright On were second in this class, too, meaning they brought home a collective $664 for two ranch riding runs.

The Brookses acquired the 5-year-old sorrel gelding in 2016. He is by the Strait Stylish stallion Jorge Derecho, and out of the Maxi Lena mare Maxis Yellow Hair.

$500-Added Open Team Roping
Who doesn’t like a good roping? Especially with a solid pay day. This open edition was won by Stoney Jones and Boons Ginnin, taking $630 for their quick work.

Boons Ginnin is a 6-year-old by Boon San and out of the Tanquery Gin mare Ginnin Woman. The horse is bred and owned by Burnett Ranches LLC.

The 5-year-old mare is by TRR Son D Seven and out of the Sixes Pick mare Fletchs Pick. She was bred by Scivally Ranch of Canyon, Texas. They earned a solid $750.

Terrific Movement, who is owned by Burnett Ranches LLC, is an 8-year-old sorrel gelding by Playin Stylish and out of the Tanquery Gin mare Cowgirl Movement.

MC Baron Drifts is a 2009 buckskin gelding bred by McPhail Land & Cattle Co. He is by Sevens Baron and out of the Pay Forty Four mare Dashin Drifts Rose.

Litta Drift is a palomino mare by Sugar Peppy Drift and out of the mare Litta Cash, a daughter of The Adamas. She was bred by H.G. Adams IV.

The Burnett Ranches-bred horse, who is owned by Kyle Schmidt, is a 10-year-old mare by Waresthecat and out of the Juno Dat Cash mare Hey Doll Baby.