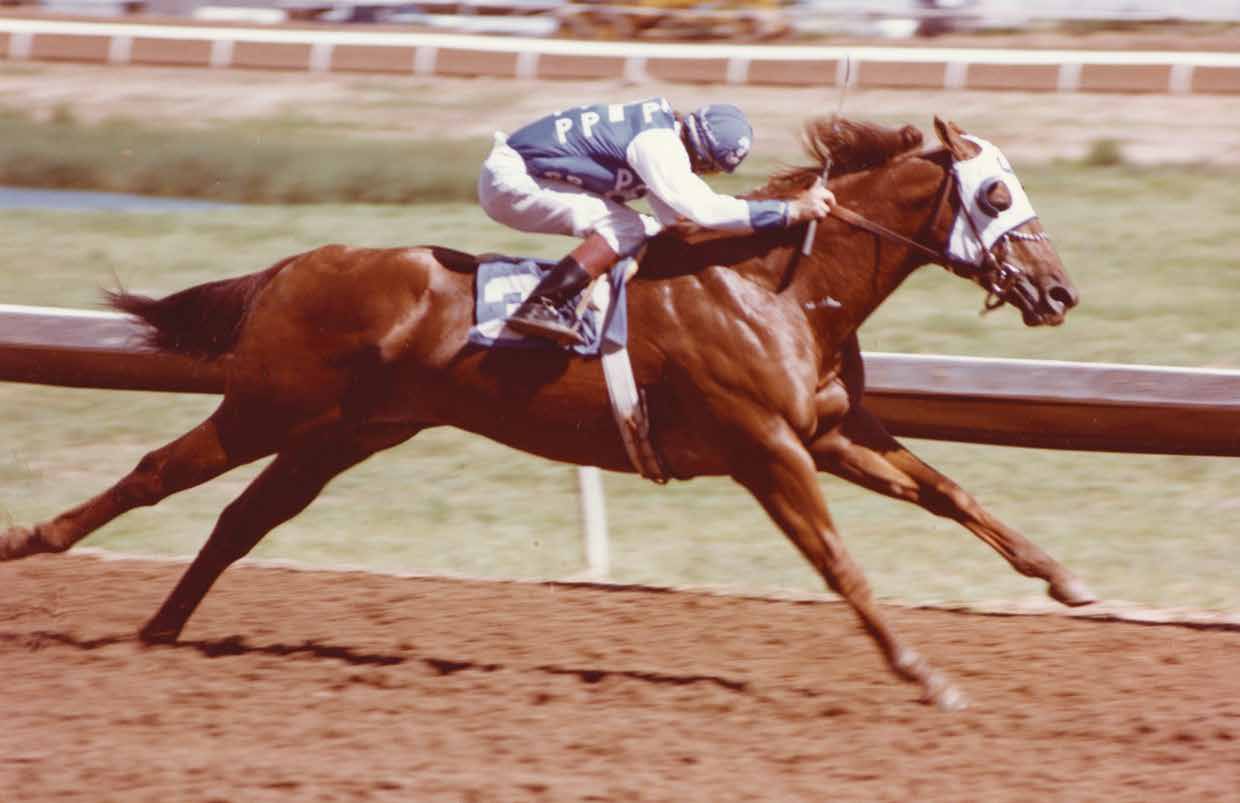 I’ve been writing this column on the history of the American Quarter Horse since January 1988, which is a little stretch of history itself. I grew up on a small stock farm in Central Texas, where I shoveled corn and bucked bales to feed the cattle we raised. I loved sitting around in the evening after the work was done, listening to old folks telling stories about great ol’ historic spreads like the King Ranch, the Pitchfork and the Four Sixes.

In spring 1979, a few months after I went to work for what then was The Quarter Horse Journal, I started hearing about a really nice 2-year-old off the Sixes.

“He was a really fast horse,” said Jerry “Nic” Nicodemus, the American Quarter Horse Hall of Fame jockey who rode the colt more than anyone else. “He was pretty easy to get along with when we started with him and as we went on with him. And he could run a lot.”

That was Streakin Six. Now retired at 71 and living in Ruidoso, New Mexico, Nicodemus is talking about a big, bright chestnut colt from the first of three crops by the ill-fated Easy Six, who died way too young at 6. The colt was one of three stakes winners out of the stakes-winning Little Request (TB) mare Miss Assured, who foaled him in April 1977 on the Tom L. Burnett Cattle Co.’s Triangle Ranch northwest of Fort Worth, Texas.

Put into training with Don Farris, Streakin Six was always ridden by top-flight jockeys, and during his first two seasons at the track, ran 15 races against only top-flight competition. He was never worse than third – and was that far back only once. The colt was second in his first two starts as a freshman to eventual champion Easy Angel in the trials for the Kansas Futurity and to eventual world champion Denim N Diamonds in the Kansas Futurity Consolation. Then he reeled off four consecutive victories, capped by his score with Danny Cardoza in the irons for the Rainbow Futurity (now Grade 1). Streakin Six wrapped up his freshman season with a second to champion Pie In The Sky in the All American Futurity (now Grade 1).

Returned to action at 3, Streakin Six was third to champions Jaimie Jay and Denim N Diamonds in the Kansas Derby and second to six-figure earner Alamitos Feature in the World’s Championship Classic, and then scored by daylight going away in the All American Derby Consolation. Finally, in his first career start away from Ruidoso Downs, he put a length on a very good field of stakes horses in the New Mexico State Fair Handicap at Albuquerque.

Streakin Six then stood his first season at stud. He came back at 4 to win a January allowance at Los Alamitos Race Course, but after three off-the-board finishes was retired with a career record of 19-10-5-1 and $473,934.
Returned to stud, first on the Phillips Ranch at Frisco, Texas, and then on the Four Sixes at Guthrie, Streakin Six sired 596 winners and the earners of $17,372,534 in 20 crops, including champions Sixy Chick, Six Fortunes, Sir Alibi, Dean Miracle and Sterling Sport; track-record holder and 1994 All American Futurity winner Noblesse Six, and 67 other stakes winners.

“To start off with, he was a heckuva racehorse,” said Dr. Glenn Blodgett, the former AQHA president who as the general manager of the Burnett Ranches horse division oversaw the stallion’s career at the Four Sixes. “Streakin Six was a heckuva sire in his own right and a heckuva broodmare sire. Streakin Six was a great horse to be around, very easy to handle, never gave us any problems around the barn, and was healthy and hearty right to the end. The influence through his daughters and sons is his biggest impact. He was just a real good horse.”

One of the top racehorses and sires of his generation now is a major influence on the top of today’s generations. Streakin Six is represented in the blood of reigning world champion Heza Dasha Fire and six divisional champions, including the world champ’s half brother, Ima Fearless Hero.

Another of the current champions carrying his blood is Jess Good Candy, whose dam is a daughter of Streakin Six’s grandson Mr Jess Perry, he by Streakin La Jolla, Streakin Six’s most successful son at stud. Jess Good Candy scored in last year’s All American, where every year since 2007 a second-, third- or fourth-generation colt or filly has carried that blood into the winner’s circle, beginning with Heartswideopen and running from Stolis Winner, Runnning Brook Gal, Mr Piloto, world champion and all-time leading money earner Ochoa ($2,781,365), One Dashing Eagle, Handsome Jack Flash, JM Miracle and on through to this year’s winner, Imperial Eagle.

That last horse joins world champion One Dashing Eagle as an All American winner by champion One Famous Eagle, a record-breaking sire who traces tail-male to Streakin Six through Mr Jess Perry and Streakin La Jolla.

So that’s a lot of history.

“I liked him right from the start,” Nicodemus says. “He was a really good individual – big, stout horse with good conformation. He was easy to get along with. When we started working him and giving him a breeze and all that, he showed a lot of potential, showed a lot of speed, showed a lot of class. He’d jump a long way, covering a lot of ground. It was just what you’d want to see in a runner. And he was really fast.”

The great horse secured his role in history.

“I’ve been fortunate to have been involved with a lot of great horses,” Dr. Blodgett said. “And he’s definitely one of them.”

So Streakin Six shaped history. I have a little bit of history myself. I was pretty green, but I wasn’t exactly a fresh-faced kid right off the farm, either, when I wrote my first feature for the Journal or started this column seven years later. So now four decades later, I’m here at my desk back in Central Texas, running fingers through graying hair a week or two after my birthday and pondering Medicare at the next one, while reflecting on a really nice career.

Yeah, it was a really nice career – what a great influence that ol’ horse has left. Streakin Six showed how fast a horse could run and how fast his babies could follow.

And that great ol’ horse shows me how fast time has flown.

Richard Chamberlain is a special contributor to the Quarter Racing Journal. To comment, write to jrnlracing@aqha.org.