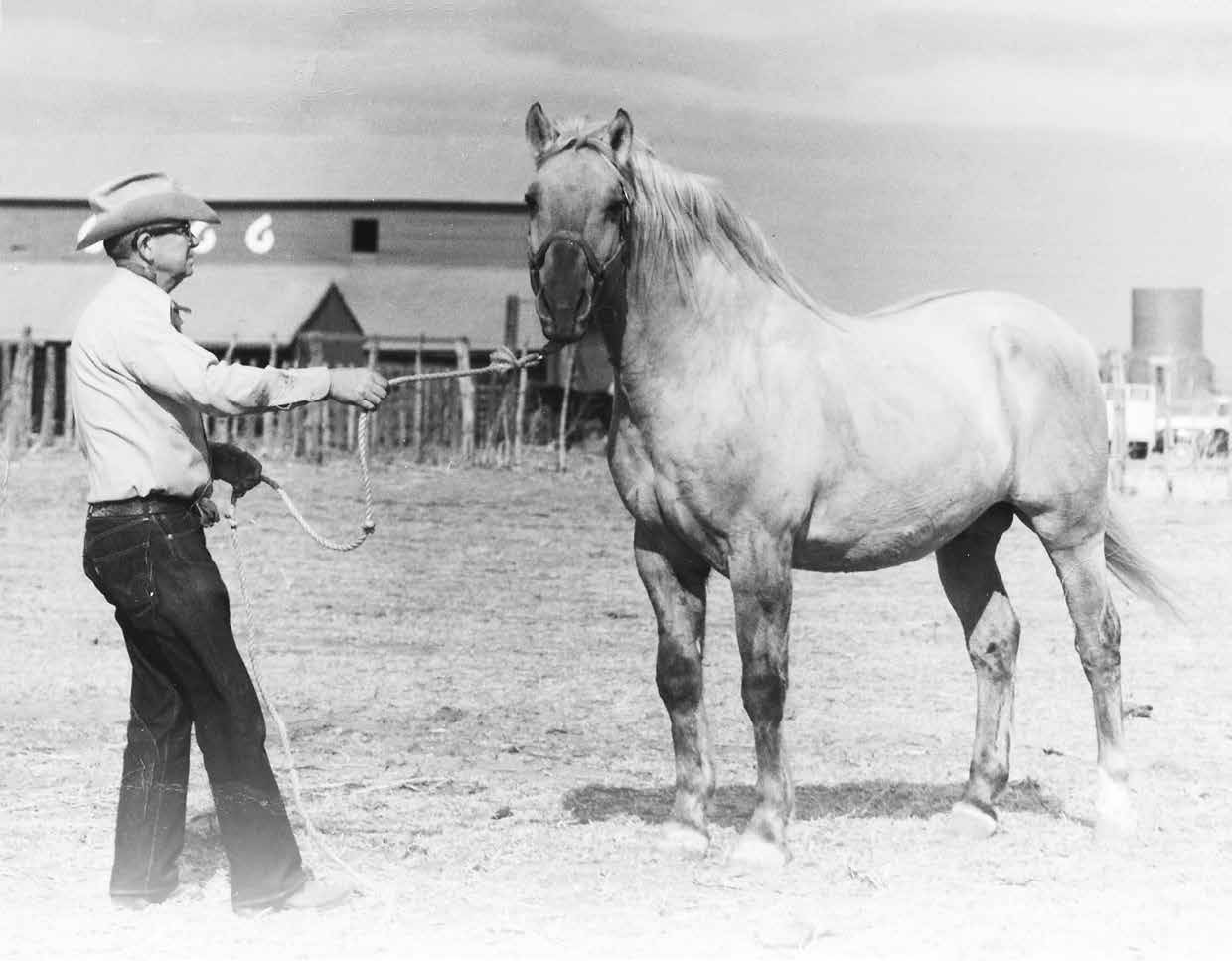 George Humphreys is a legend in the west Texas ranch country. George went to work for the Four Sixes Ranch, headquartered at Guthrie, Texas, in 1918 at age 19. He retired 52 years later, in 1970, as foreman. The Four Sixes was founded by S.B. (Burk) Burnett and was managed by Bud Arnett at the time George started work there. I interviewed George in 1974 for a story in The Quarter Horse Journal, and he told me how he got the job.

“I was living at Aspermont (Texas),” he said. “I had a friend named Curtis Ray who was working for the Sixes, and I wanted to go to work there. Curtis and I went to Guthrie, but when we got there, Bud Arnett wasn’t there.”

George unloaded his saddle and bedroll and he and Curtis sat down to wait. In about 30 minutes, Bud Arnett came driving up in a buggy, and the two boys walked out to meet him.

“Curtis told him I wanted a job,” George said, “and I’ll never forget what he said. He wore glasses, and he kinda looked over the top of those glasses at me – I didn’t weigh but about 115 pounds – and said, ‘Young rooster, what can you do?’

Arnett told George to hang around for two or three days, that he might be able to put him to work. The next morning, George walked out to the corrals. He was looking through the board fence at a bunch of horses, feeling low because he was pretty sure he wasn’t going to get a job, when Arnett called to him. “Young rooster, if you’re gonna work, you’d better get your saddle and bridle and get in here.”

Arnett had a cowboy rope George a horse that he thought would buck so the manager could see just how good of a bronc rider George was.

George said, “Mr. Arnett had the boy hold this horse while I saddled and bridled him. He was a big bay horse that weighed about 1,200 pounds. When I started to get on him, about the time I laid my leg over the cantle, he popped open with me. Pretty good bucking horse.

“Well I rode him, got along fine. We were going to ride down to the old 8 Ranch, and we got there about sundown. He bucked with me some more, but not like he did at first, so I told Curtis, ‘I’m not gonna unsaddle this son-of-a-gun. I’m just gonna leave the saddle on him and tie him to the fence, let him soak with that saddle on.’ The next morning, he was pretty well drawed, but he didn’t give no more trouble.”

For the next year or so, George rode a series of bucking horses, as he went about the ranch work. One morning, wagon boss Billy McClaren roped a horse out of the remuda, and told George to put his bridle on him.

“Every time I got close to his head,” George said, “that horse would come at me with both forefeet a pawin’. Mr. McClaren told another cowboy to get his rope and get that old bronc’s toes in a loop so I could bridle him. The cowboy forefooted him and laid him down, and I put my bridle on him.

“The old pony was kinda sitting on his haunches. I was gonna let him up to saddle him, but Mr. McClaren told me to just saddle him right there. So I got my saddle on him and then Mr. McClaren said, ‘Now get on him. You probably can’t get on him when he gets up.’ And I couldn’t have either, ’cause he wasn’t broke at all. I’ll bet he hadn’t been rode three times. But there wasn’t any buck in him, he was just green, that’s all. He wouldn’t handle any, but I loose-herded him around there while everybody else saddled up – there were 12 or 15 cowboys there – and we headed off south.”

George said that the ranch raised around 500 colts a year when he went to work there, and that they used to break from 230 to 235 horses every spring.

“Never did break a horse until he was 3 years old,” George said. “He was 3 before we ever put a saddle on him. And if one didn’t look good then, or was too small as a 3, we’d pass him up and turn him out in the pasture until the next year.

“We’d put those horses in the bronc pens and we’d have 10 or 12 stompers down there that broke horses. We’d usually start about the middle of February and we wouldn’t do anything else until about the first of April. We’d break that many horses in that length of time.

“I was just a young button, but I was wild as a little March hare. I might not have been as wild as some of those ol’ ponies, but I thought I was. I was a top bronc stomper. I worked at the bronc pens for several years, and then they turned it over to me and I ran the bronc pen. Now, I’m not bragging, but when I first came here, very few horses ever bucked me off. I have been bucked off three or four times, but not many times back there when I was in my prime.”

George said, “But because I was a pretty good bronc stomper, I started out drawing $30 a month. Cowboys drawed $25 a month, but good bronc riders got $5 more. There were some good cowboys making less than I was, cowboys with more experience, but I never did work for less than $30 a month.”

“I’ll tell those stories today and people say how it’s a shame that years ago we didn’t have those good horses that we’ve got now. But, we had good horses back years ago. Good as a man ever put a leg across. People kinda forget those things.”

Jim Jennings is the retired AQHA Executive Director of Publications. He is the author of the books “Best Remudas” and “They Still Ride Good Horses,” both of which are available at Quarter Horse Outfitters. He said he never spent a more enjoyable afternoon than the one he spent in George Humphrey’s living room, listening to the stories.