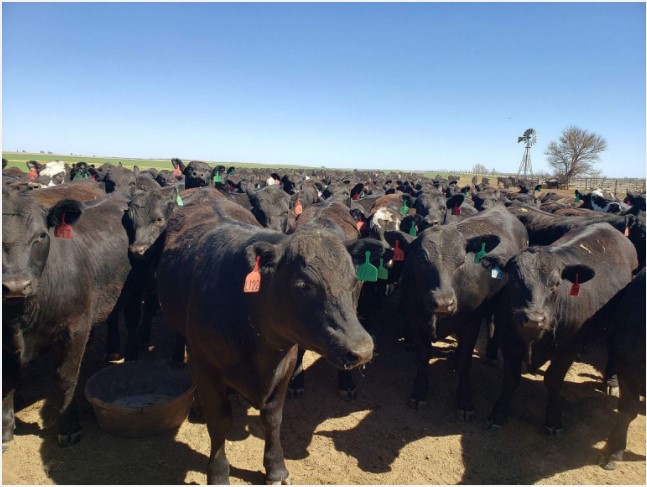 Plans are going full steam ahead by the private organization, U.S. CattleTrace, to establish a nationwide cattle disease traceability program in the event of a disease outbreak. After just wrapping up a two year pilot research project, the CattleTrace team has selected ultra-high frequency tags for livestock.

“This technology isn’t new, but the tag technology is new to the cattle industry. When runners finish a race, or when you use the card or tag in the (non-stop) turnpike lane, this is the same type of technology that is utilized in ultra-high frequency tags. When a tag is read, we only collect four minimum data points: the individual tag ID for the animal, the date, time and GPS coordinates of the location where that calf was read. That information is then transferred to their database where it is stored and would be used if an outbreak were to occur,” said Callahan Grund, who became the executive director of CattleTrace in May.

“When U.S. CattleTrace was formed, it was determined that the organization would allow an automated transfer of data for the purpose of disease traceability and will be utilizing the ultra-high frequency tags into the future to achieve speed of commerce within the system. Because these tags are a relatively new technology for the cattle industry, U.S. CattleTrace is focusing on working with packers, feedyards and auction markets to install systems that will be able to read the UHF tags,” said Grund. The non-profit kicked off the two year pilot project in 2018 to lay the groundwork for the national plan. Approximately 55,000 ultra-high frequency ear tags were distributed for the pilot, and that project wrapped up in June. Their research gave the board of directors a plan for the next step.

“The pilot project was in Kansas, while similar projects took place in Texas, Kentucky and Florida. In January, all of these states joined together to form what is now U.S. CattleTrace,” said Grund, who is originally from Sharon Springs, Kan. Grund grew up on a registered Gelbvieh, Balancer and Angus seedstock cow-calf operation and is still involved in the family ranch. He currently lives in Wamego, near U.S. CattleTrace headquarters.

“If there was a disease outbreak in one city, that would help isolate that one area, so you don’t shutdown other states. You just isolate that, and make decisions from there.”

Security and safety are key factors for the project.

“Data privacy is paramount to us and our producers. Since we are a non-profit organization and own our own database, if an animal disease outbreak were to occur, government animal health officials would only be able to access specific data after approval from our producer-led board of directors,” Langvard said. “This allows us to assist animal health officials while keeping data secure from outside organizations.”

“We keep all the producers information locked away, and safety is of utmost importance to us.” said Grund. “We only collect those four data points needed for a disease traceback into our system,” he said, noting their data has various safety measures in place.

A fourth generation Angus seedstock rancher who is on their board of directors, Mark Gardiner, owner of Gardiner Angus Ranch in Ashland, Kan., said the CattleTrace program currently operates in several states, and he hopes it will eventually be a nationwide program.

“When we look at the issues of the world today it is easy to see how tracing where our cattle have been is important. There are two countries in the world that do not have trace back systems in place for their cattle, the United States and India. Beef is the most sought after protein in the world. U.S. beef is the highest quality, safest, and best beef in the world. Our consumers want confidence that we know where our product came from,” Gardiner said “My sons and nephew are the fifth generation to be ranchers where my great grandfather homesteaded in 1885. We also purchase quite a few customer steers and heifers, run them on grass or wheat and retain ownership through U.S. Premium Beef.” Gardiner also farms ground on which he plants triticale and wheat to graze cattle. He farms in partnership with his two brothers Greg and Garth, his wife Eva, sons Ransom, Cole, and Quanah, and their nephew Grant.

“Continuing to implement all of the tools possible to create the best beef cattle possible,” Gardiner said. “U.S. CattleTrace is very important as we provide accountability to our food supply. This trace back program will add value to the business of beef.”

“If there was a disease outbreak in one city, that would help isolate that one area, so you don’t shutdown other states. You just isolate that, and make decisions from there,” Gardiner said. He emphasized that CattleTrace is not being mandated by the government, but rather on building a system in the possibility that a disease outbreak would occur.

Being a voluntary system, Grund noted they don’t want to change producers’ management plans, but want to encourage the traceability. Their next step is continuing to sustain funding and sources of revenue as U.S. CattleTrace grows.

“We want to grow producers and members across the nation, to educate about the importance of traceability,” Grund said. “Before COVID, we had many meetings with producers. We look forward to getting to conventions, and in front of producers to talk about CattleTrace. We have a great volunteer leadership team, and they’re really passionate about it, from the pilot project and organizational work. It was a passion of ours to make it successful. We’re excited about forging ahead with traceability and getting a system in place.” ❖

— Hadachek is a freelance writer who lives on a farm with her husband in north central Kansas and is also a meteorologist and storm chaser. She can be reached at rotatingstorm2004@yahoo.com