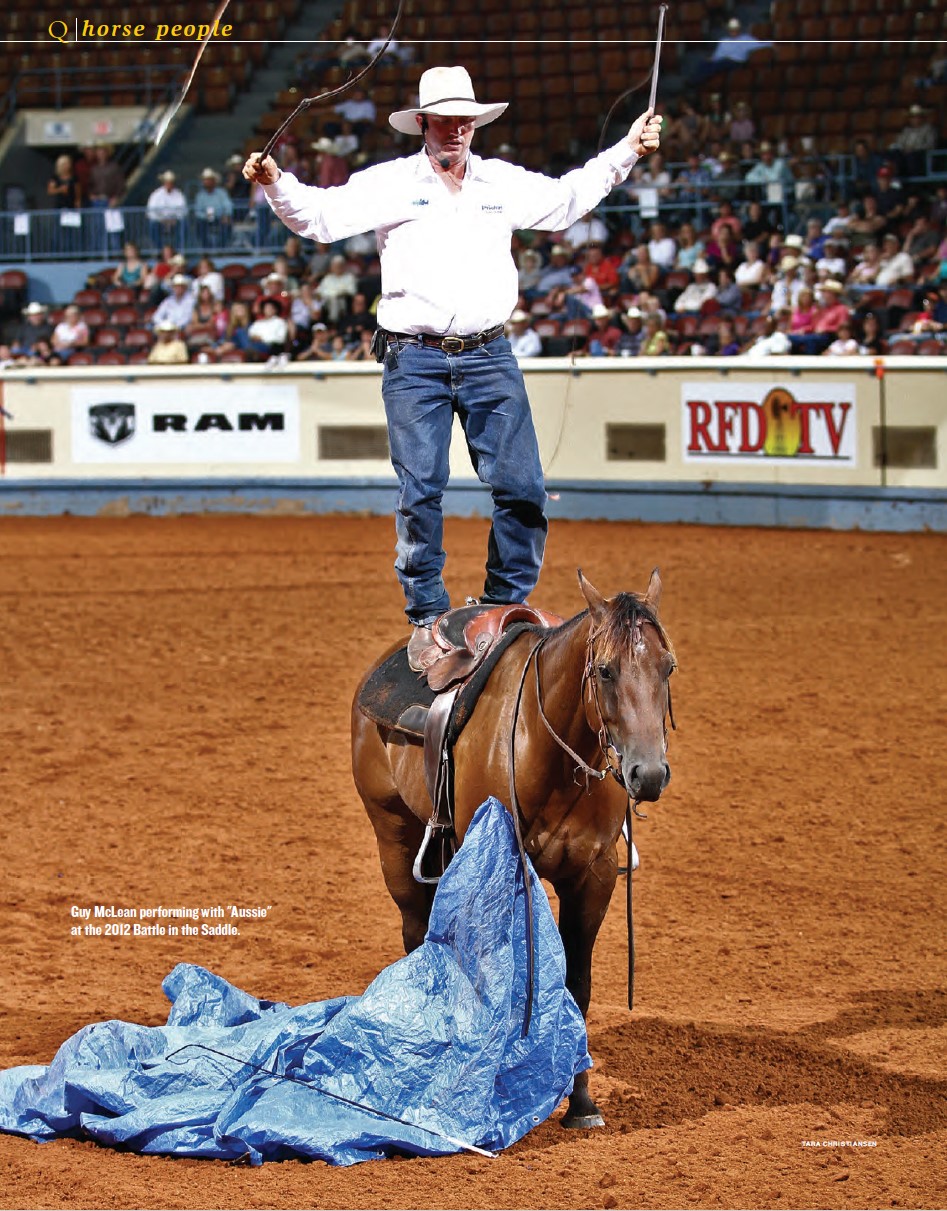 Horse DivisionRoad To The Horse

On Down the Road

Home | Blog | On Down the Road

Since 2012 Road to the Horse colt-starting championship, “Aussie” and “Swampy” have seen a lot of miles.

They went into the 2012 road to the horse colt-starting championship as mostly unhandled 3-year-olds, a little rough around the edges but with a lot of potential and stellar pedigrees from the Four Sixes Ranch.

Now, not quite a year later, Valliant Paddy and Remember Sunset are full-fledged members of their owners’ traveling squads of performance horses – gems that are becoming brighter all the time.

Last year’s Road to the Horse featured an international team format, and it was the duo from Down Under, Guy McLean and Dan James, that prevailed. After spending three days starting their Four Sixes colts under saddle – and making amazing progress – both men chose to purchase their colts and continue the journey.

Guy’s colt is Valliant Paddy, a bay son of Paddys Irish Whiskey now better known as “Aussie” so that he fits in with Guy’s troupe of Australian-bred horses that have been collectively nicknamed “the Awesome Aussies.” Dan purchased Remember Sunset, a gray gelding by world champion cutting horse Seven From Heaven. He now calls him “Swampy.”

“He’s a special individual,” Guy says of Aussie. “I love him. As a horseman, I love those high-energy ones, but the American public, they love the ones that are going to keep them safe. He’d be the horse to do it. He’s just an awesome fellow. He’d be the safest horse I have to put a young rider on, and that’s who he is.”

Guy then morphs his Australian accent into a Texas twang. “I’ll just stand here and wait until you get it right,” he says, voicing his young gelding. “Aussie, he’s got a Texas drawl: ‘Don’t worry, you’ll get to love me.’ ”

If Aussie’s energy level is a little lower than some of Guy’s other horses, that might just solidify his role in Guy’s act. One of Guy’s signature moves is riding one horse, while working three others at liberty. He’ll ask one horse to lie down, while Guy’s saddle horse and two with no tack sidepass over.

“He loves lying down,” Guy says with a laugh. “He doesn’t have to run when he’s lying down.” In fact, sometimes, he’ll get comfortable and stretch his legs out, making it a little difficult to sidepass across him.

But don’t think he’s not a worker when he needs to be.

Guy has worked several yearlings from Aussie’s back, as well as a 2-year-old that he was starting under saddle.

“He’s everything the Four Sixes bred him for,” Guy says. “Any time you need to do a job with him, if you ask him to be the work horse, he will step up.”

He can be ridden bridleless and saddleless, and he’s almost fearless while performing at large expos. “Since Road to the Horse (and its electric audience), I cannot find a crowd that will upset him,” Guy says. He has since told audiences that “If you can scare Aussie, I’ll give you all the money in my left pocket.” When the crowd roars and Aussie remains calm, then Guy gets a laugh: “I believed in Aussie, but I did have the money in my right pocket.”

In late November, when Guy spoke to America’s Horse, he was looking forward to taking Aussie to Las Vegas, where he’d be doing at least two demonstrations a day at the Wrangler National Finals Rodeo on behalf of Priefert, Guy’s major sponsor.

Guy was also excited about bringing Aussie back to the 2013 Road to the Horse, March 15-17 at the Kentucky Horse Park in Lexington, where both he and Dan will get some time in the spotlight with their colts.

“I want to showcase him,” Guy says. “Everyone thinks Road to the Horse can ruin a horse. Within four weeks, I was riding him bridleless and saddleless. I wish every horse was as ‘ruined’ as Aussie or as Swampy.

“They’re going to be doing some terribly special things (at Road to the Horse), and they will showcase them.”

At the 2013 event, Guy and Dan will be competing individually against Obbie Schlom and Sarah Winters.

So, is he considering purchasing this year’s colt, which will also come from the esteemed Four Sixes remuda?

“I definitely will,” Guy says, “and whether I place him somewhere or I keep him forever, I will know that his future is secure and he’s safe. If I call myself a horseman, I have to worry about that.”

And as for Aussie, “He’s one of the oldest souls I’ve ever worked with,” Guy says. “I’m so glad I own him.”

When Dan first purchased Swampy, “The suggestion was made that we would put some work into him, and then move him on,” he says.

That is no longer the case.

“I could not part with him now. It’s just the horse’s ability to try so hard. ‘I’m trying, I’m trying to get there.’ I love that about him. He’s got a big heart. And that horse has got such a big motor, I have no doubt I could go out all day and work cattle and push him hard, and he’d be right there,” Dan says.

Instead, he’s becoming a regular member of Dan’s specialty act. Dan tours with Dan Steers as part of Double Dan Horsemanship, and the two show off their skills by Roman riding, riding through fire and other stunts.

Swampy has been to places as far flung as Wisconsin, British Columbia and Massachusetts, where Dan used him in a long-reining demonstration, and “He did everything from the ground work and the liberty work.”

And that’s without too much training. After the 2012 Road to the Horse, Dan’s travel schedule got crazy, and he had intended to give Swampy some down time anyway. So from mid-March until mid-July, Swampy got a vacation.

“He really hasn’t had a great deal of time spent on him,” Dan says “But what impressed me, he kind of went right on with it. There was no having to go back and start all over. The colt completely picked up and went right on with it,” just where they had left off after Road to the Horse.

“That, to me, said that he understood the lessons we went through at Road to the Horse,” Dan says. “It exposed him to an electric atmosphere and helped him to be comfortable in those situations.”

But with that said, Dan believes that in an event like Road to the Horse, where lots of lessons are condensed into very little time, “It comes down to the individual working on that particular horse not asking too much.”

In Swampy’s case, “you’ve got to slow down and let him understand. When he doesn’t understand, he lets you know it. … (It requires) being diligent and aware, to make sure when this guy gets a little hot that you slow down the process so that he understands. He’s one of those horses, you couldn’t take him and make a lot of mistakes and get away with it.”

But it keeps Dan on his game as a horseman, and he enjoys the challenge. The progress he has made with Swampy also has him thinking about purchasing his 2013 Road to the Horse trainee.

And, like Guy, he’s looking forward to showing this year’s Road to the Horse audience what he and Swampy have achieved.

“He’s going to be heavily involved in opening ceremonies, then we will use him in our specialty acts,” Dan says. “He’ll work with the team of horses, and also he’ll perform individually.”

The specialty acts, Dan says, just illustrate what good, solid horse training is all about.

“It just comes down to a horse that is well broke and confident and can be in any situation we ask him to be in.”

And Swampy’s headed in that direction.

“He has got a laydown on him,” Dan says. “By Road to the Horse, I’m pretty confident he’ll be a rearing son of a gun, too.”

Visit www.roadtothehorse.com to learn more about the 2013 event. AQHA sponsors the remuda at Road to the Horse and provides booklets with the horses’ pedigrees to spectators. Look for coverage of the March 15-17 event at americashorsedaily.com and at www.twitter.com/americashorse.