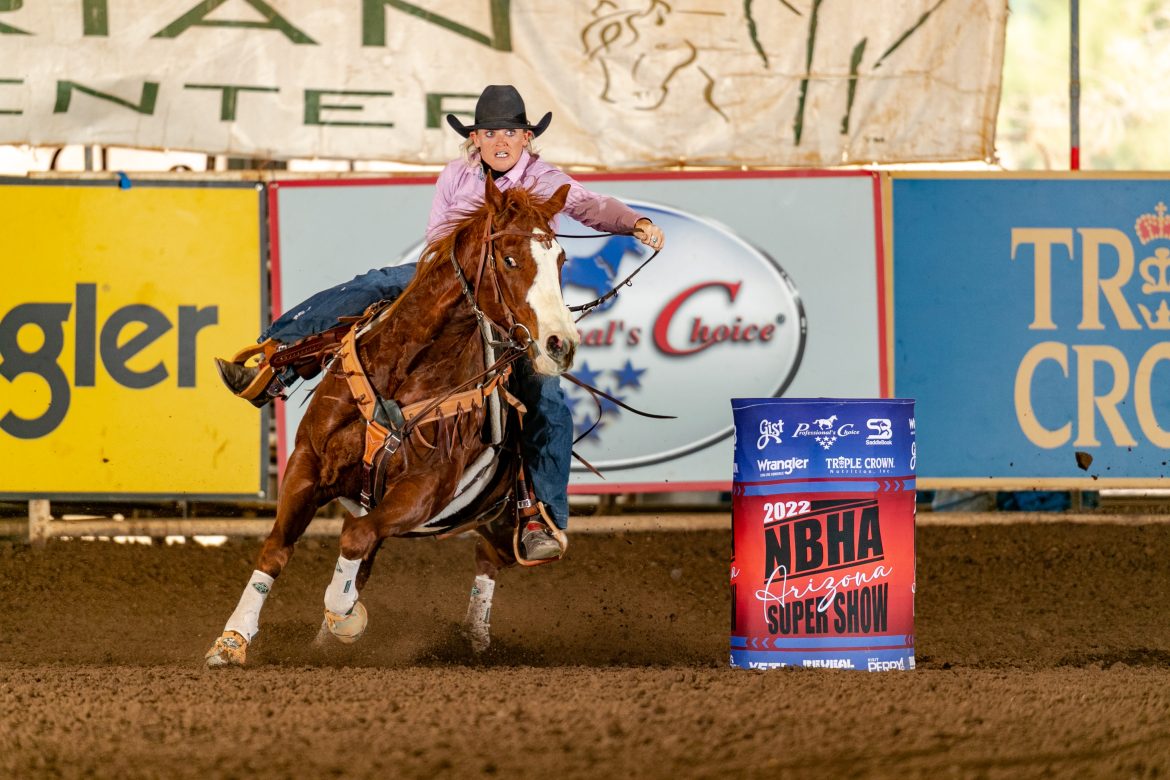 By Rebekah TriceFebruary 10, 2022No Comments

When the 2022 Women’s Rodeo World Championship (WRWC) rolls into Fort Worth, Texas, May 16-18, Qualifying Series Winner Jimi Jones will be eligible to take a stab at the $750,000 payout—the largest women’s rodeo payout of the year. By virtue of nominating and entering the D3 barrel racing WRWC Qualifying Series on January 22, which was held in conjunction with the National Barrel Horse Association (NBHA) Arizona Super Show Race No. 2 in Buckeye, Arizona, Jones earned 78.5 points as the Challenger winner with her time of 17.234.

Qualifier Series Events (QSE) like the one in Arizona are held leading up to the 2022 WRWC in order to give athletes who nominate via the VRQ a chance to compete for one of the most lucrative and widely viewed network television events in rodeo history—and most definitely in the history of women’s rodeo.

Jones, of Arlington, Arizona, capitalized on her last-minute decision to nominate through the innovative VRQ in hopes of earning a qualification to the 2022 WRWC.

“It was the first time I’ve nominated,” said Jones. “I nominated the morning of the race and after I placed seventh, I was shocked when the World Champions Rodeo Alliance called to tell me I’d won because I just figured someone who had placed above me would have nominated, but they didn’t. It was just $100 to nominate, and I won back $320 in fast cash, so it was great to get some extra cash on top of what I won in Race No. 2.”

Rodeo and barrel racing are Jones family traditions and Jimi says she is grateful to have been given the opportunity to run her mom Tanya Jones’s home-trained standout, Rockin A Lil, aka “Slick.”

“He’s by a cutting sire, Rockin W and out of a Docs Hickory granddaughter,” said Jones. “In fact, he’s all cow-bred and his pedigree is not one that is known to produce lots of barrel horses, but he’s a great one. He’s actually a phenomenal breakaway horse too; he loves it. My 5-year-old little boy can rope on him, my dad heels on him. He’s phenomenal.”

Fans might recall seeing the blazed-faced sorrel gelding when he was ridden by mom Tanya at the 2021 WRWC in Las Vegas, Nevada, during the semifinals. Slick has lifetime earnings in barrel racing of more than $90,000, having cashed paychecks with Tanya at major rodeo venues like Cheyenne Frontier Days, Prescott, Elko and many more.

“He’s my mom’s good rodeo horse,” said Jones. “She did good on him at the WRWC in Vegas, he’s won second at the Reno Rodeo with her, they won St. Paul, they’ve won a lot together. He’s run a 16.8 on a standard pattern. He’s as good as they come.”

Slick first showed the Jones family what he was made of in his debut as a highly decorated futurity horse five years ago.

“My mom had three futurity horses that year and he was the one she considered to be the furthest behind because he’d only been on the barrels for four months when she went to the Arizona futurities,” said Jones. “He surprised us all when she won the Greg Olson Futurity [in 2017] on him. He’s just 14.2 hands tall, but he’s all heart and gives 100 percent every time no matter who’s riding him.”

Jones and Slick will put all their effort on the line in Cowtown Coliseum on May 16-17 for a chance to ultimately make it through to the final round on Wednesday, May 18 where athletes will rope and ride in pursuit of world championships. A record 2.3 million viewers tuned in to the 2021 WRWC when it was held in Las Vegas, Nevada, and the Fort Worth installment aims to bring women rodeo athletes into that many homes or more in 2022 as the WCRA and PBR continue their efforts to transform the sport of rodeo via mainstream viewership and rich payouts.

For more information on the WRWC visit https://wrwc.rodeo.

Click here to read the full article on Western Horseman.