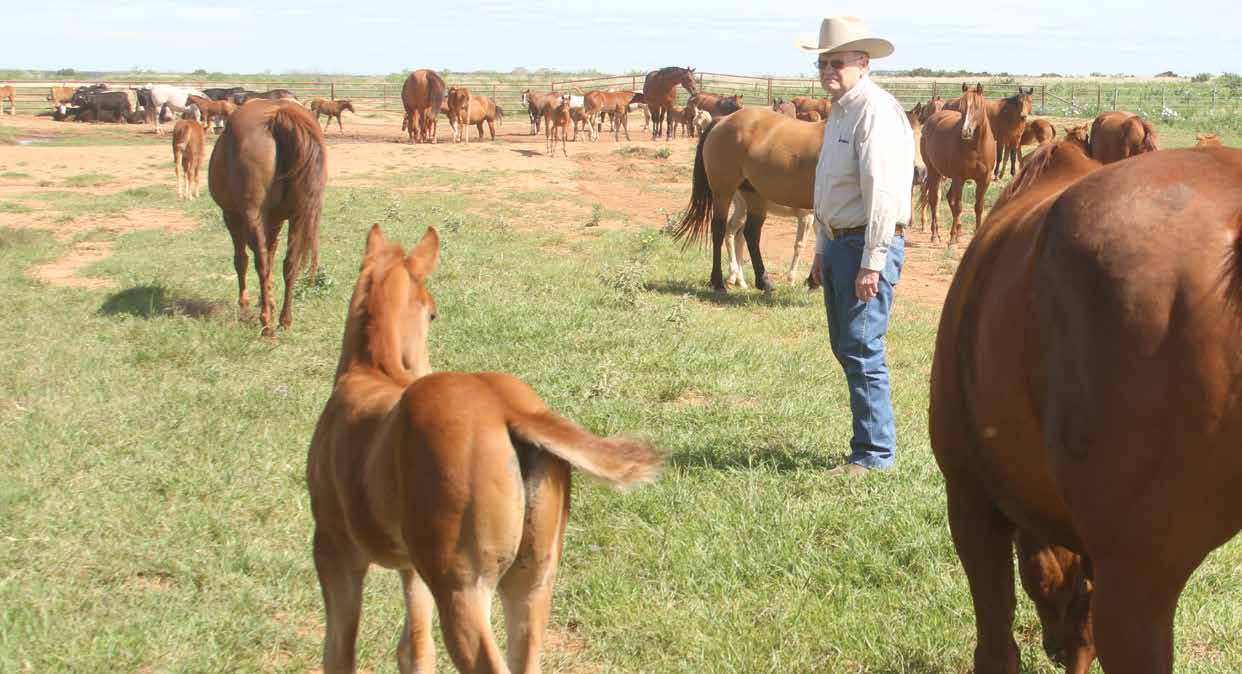 AQHA president Dr. Glenn Blodgett has been with the legendary Four Sixes Ranch at Guthrie, Texas, since 1982, during which time he has had the opportunity to handle the breeding of legendary stallions Dash For Cash, Special Effort, Streakin Six and Tanquery Gin, along with such current top
stallions as One Famous Eagle, Mr Jess Perry and Bodacious Dash for the racing industry, and Paddys Irish Whiskey, Sixes Pick and Bet Hesa Cat on the performance side. And there are more; that’s just part of the stallions in the breeding barn at the Sixes. The lineup of horses includes All American Futurity winners, racing leading money earners and world champions
in racing as well as in a wide variety of performance events. The ranch has become a mecca for broodmare owners, and it’s just exactly what Dr. Blodgett was looking for from the time he graduated from veterinary school.

Glenn Blodgett was raised in Spearman, Texas. He graduated
from Oklahoma State University and then veterinary school at Texas A&M University. For the first two years after graduation, he worked for Dr. Ed Murray at Spur, Texas.

At the end of two years, Dr. Blodgett and his wife, Karen, returned to the northern Panhandle, where he went into partnership with another veterinarian in a new clinic in Spearman. For the next six years, he did most of the horse work for the clinic, including some reproduction work. In the spring of 1982, he handled all the breeding for Danny and Jolene Urschel’s Ruidoso Triple Crown winner Special Effort and All American Futurity winner Pie In The Sky. But still he thought a lot about the ranch work.

“I was doing some work for some of the ranches around Spearman,” Dr. Blodgett says, “and I was doing the veterinary work for the Four Sixes Ranch division that’s up in the Panhandle, south of Borger. Then, in July 1982, I got a call from Mrs. Anne Marion, who owned the Four Sixes. She wanted to improve the horse operation at the ranch headquarters in Guthrie, and wanted someone to run it and be the veterinarian.”

Anne Marion is the great-granddaughter of Burk Burnett, who founded the Four Sixes. She had inherited the ranch from her mother, Anne Burnett Tandy, and was continuing to run it much like it had always been operated, with an emphasis on good cattle and good horses. With approximately 275,000 acres under fence, the ranch needed good horses. It maintained
a large band of broodmares, from which the ranch horses were produced, and Mrs. Marion wanted to make it as efficient as possible by artificially inseminating the mares.

Dr. Blodgett started to work in August 1982, and for the first several years, he worked strictly with the ranch mares, gradually improving the bloodlines and the efficiency of the breeding operation. Then Mrs. Marion talked to him about expanding the horse operation, and they made arrangements to bring Dash For Cash to the ranch. They also repurchased
some shares in Streakin Six – he was bred by the ranch – and brought him back, and they bought Special Effort. On the performance side, and to raise ranch horses, the ranch acquired Tanquery Gin and his full brother, Shot O’ Gin.

Suddenly, the Four Sixes horse operation, with Dr. Blodgett at its helm, had become a major force in the industry. More stallions were added – in both the racing and performance industries – and soon, hundreds of mares were being hauled to Guthrie during breeding season.

The popularity of the horses and the breeding operation at the Four Sixes projected Dr. Blodgett into the middle of the industry, and in 1988, he was appointed to Texas’ first racing commission. In 1991, he was elected an AQHA director and appointed to the stud book and registration committee. He served on that committee until being elected to the AQHA Executive Committee in 2011, and was chairman of the stud book committee for three years. He was elected AQHA president in March of this year.

Dr. Blodgett has also served on the board of directors of the American Association of Equine Practitioners, an AQHA alliance partner. He has
received the AQHA Racing Council Special Recognition Award, and he was named equine practitioner of the year by the Texas Veterinary Medical Association. While he was on the Texas Racing Commission, he received the
Association of Racing Commissioners International’s Joan Pew Award for racing commissioner of the year. He is a member of the Texas Horse Racing Hall of Fame and has been recognized as an outstanding alumnus by
both Oklahoma State and Texas A&M universities.

Shortly after he was elected at the convention in Fort Worth, Texas, Dr. Blodgett announced some priorities that he intended to concentrate on during his year as president. He spoke of the welfare of the horse and stressed how important it was for AQHA and its members to lead in this area, and he mentioned the five-panel genetic disease test and how it was helping members make breeding decisions and to become more responsible breeders.

Dr. Blodgett says, “From all standpoints, whether it’s health, nutrition or breeding, I want to do everything we can as an association to help our members in every way we can.

“And that includes the youth. We need to be able to keep our youth, keep them interested and make their experience with horses even better, but we also need to get more kids and start getting them involved at a younger age.”

He mentions the popularity of the huge team-roping and barrel-racing events across the country, and he says that AQHA needs to do all it can to entice those who use Quarter Horses in those events to become Association members and to register and transfer their horses.

Dr. Blodgett says, “We’ve suffered a pretty good decline in registration numbers recently, and that has impacted our income. But it’s still important for AQHA to reach out to all its members. We must remain fiscally responsible while trying to address the needs of all facets of our industry, and that’s a real challenge. Our members have so many different desires, it’s hard to address them all.”

The breeding operation at the Four Sixes is one of the most complete in the nation, with Dr. Blodgett and his staff handling live, cooled and frozen semen, as well as performing embryo transfers. But running one of the largest equine breeding facilities in the country has not prevented Dr. Blodgett from doing the ranch work that he wanted to do when he graduated from veterinary school. He handles all the veterinary services for the Four Sixes, including the cattle work, and he operates a full-service equine veterinary facility for neighboring ranches.

His job is not all veterinary work. As horse division manager, Dr. Blodgett also manages the mating of the ranch’s select group of broodmares, from which foals are sent to both the racetrack and the performance arena, and he makes the decision as to which foals are sent into competition and which are prepped for various sales. He also manages the annual Return to the Remuda Sale, which involves the Four Sixes and three other area ranches. It’s strictly a ranch horse sale, and last year the sale grossed more than $1 million.

Dr. Blodgett has no plans for retirement, saying that he really enjoys what he does. But he should. He wanted to do veterinary work for a ranch, and that’s exactly what he’s doing. It’s just that there’s a little more to it than he was planning on.

Jim Jennings is the retired AQHA Executive Director of Publications but still writes an occasional article for both America’s Horse and The American Quarter Horse Journal. He has known Dr. Blodgett for more than 25 years and has visited the Four Sixes Ranch a number of times. To read a more complete article on Dr. Blodgett, see the September issue of the Journal.