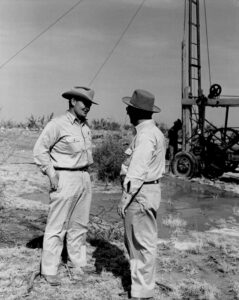 The Burnett family has long been dedicated to the responsible stewardship of the land and water resources of their ranch holdings. Over time, this has even included land they leased in the Indian territory of Oklahoma around the turn of the 20th century. This gained them the respect of Comanche chief Quanah Parker, who became a family friend.

At one time, the Burnett ranches included more than a third of a million acres. After 1980, however, various parcels, such as the Triangle Ranch, were sold. Today, the two main ranches – the Four Sixes Ranch near Guthrie and the Dixon Creek Ranch near Panhandle – total 260,000 acres. 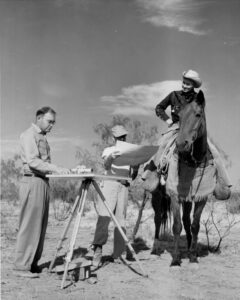 While cattle and ranching were the cornerstones upon which the Burnett Family fortunes were founded, it was the discovery of oil that allowed the business grow and led to the establishment of the Burnett Foundation which today benefits so many worthy causes.

Actual drilling of Gulf No. 2 Burnett, 16 miles north of Panhandle, Texas, began in November, 1920 and was completed in April, 1921. It was 3,052 feet deep, and 175 barrels were produced during the first 24 hours of pumping. The well produced constantly for more than 50 years. This was the first oil well brought in on the Texas Panhandle Field, relatively small compared to future wells, one of which produced 10,000 barrels a day.

Following this first discovery, hundreds of people flooded the town of Panhandle. Oil field workers, lawyers, firefighters and lumbermen literally changed the city in a very short time. So busy was the Panhandle Oil Field from 1919 to 1957, that it was considered too dangerous to smoke where the drilling was taking place, so the men took up chewing tobacco like the old favorite brands Mail Pouch and Beech Nut. 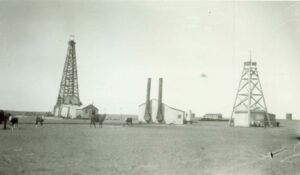 Captain Burnett, who died in June 1922, did not live long enough to enjoy this increasing wealth. Not a problem: he was rich without it. He foresaw and wrote to his friend, Sid Williams, a couple years before he died, “This puts four of the best outfits in Texas drilling in there [Dixon Creek Ranch], and they should get something by spring if there is any oil field up there. Of course, this would put the ranch out of business as far as cattle are concerned. But there is more money in oil than cattle, don’t you think?”

Oil continued to be an important part of the Burnett Legacy, as over the years more wells were brought in. In 1969, another large field was struck, this one at the Four Sixes Ranch in Guthrie.

Author F. Stanley wrote: “When it comes to the history of oil in Texas, the name Burnett is definitely one to be reckoned with. In all probability, oil would have been discovered in the Panhandle whether Burnett leased the Four Sixes pasture or not. But the fact remains that he did, and oil as a big business in this section of Texas began with this ranch because of the Discovery Well.”

The Four Sixes is a place of continuity and tradition. Through the years, there have been just six managers at the ranch headquarters in Guthrie, Texas: J.W. “Bud” Arnett, Horace Bryant, George Humphreys, J.J. Gibson, Jr., his son Mike Gibson, and Joe Leathers.

Bud Arnett had the distinction of being the 8 Ranch’s only manager and the Four Sixes’ first. He was hired by Captain Burnett when he bought the 8 Ranch at the turn of the 20th century and made it the Four Sixes. Arnett’s tenure lasted from the open range days of the Old West into the modern era of ranching. He retired in 1930 after more than 30 years with the Sixes.

Horace Bryant, formerly wagon boss for the Sixes, was well-liked by all but managed the ranch for only two years, making his intention to leave for personal reasons in 1932.

George Humphreys started working on the ranch in 1918 at the age of 18, hired by Bud Arnett. He was made manager in 1932 and guided the ranch through the Depression and all-time low cattle prices. He developed the horse operation and also served as sheriff of King County from 1928 to 1948, receiving the designation of Honorary Texas Ranger. He retired from the Four Sixes after 52 years on Nov. 1, 1970.

J.J. Gibson, Jr. was the ranch manager from 1970 through 1991. Gibson received the Texas Trailblazer Award at the Texas Roundup in 1998, was a member of the Hall of Fame of the American Hereford Association, and he received the Foy Proctor Cowman Award of Honor in 2001 just days before his death on October 14 of that year.

Mike Gibson, son of J.J. Gibson, Jr., succeeded his father in 1991, and took great pride in helping maintain the fine reputation of this legendary ranch.

Joe Leathers was named General Manager in 2008. He previously had managed the Burnetts’ Dixon Creek Ranch near Panhandle, Texas. His special interest is in the cattle program and rangeland management side of the business, and he works with Dr. Glenn Blodgett on some aspects of the ranch’s horse program.

Today, the Four Sixes Ranch in Texas represents both the present and the past. This is largely due to the foresight of Captain Samuel “Burk” Burnett and the management and support of his descendants, who value their heritage and the prominent ranch’s place in the history of Texas and the American West.

For more information on the history of the Four Sixes and the Burnett family, as well as photographs of the ranch, please refer to the beautiful book “6666: Portrait of a Texas Ranch”, by photographer Wyman Meinzer and author Henry Chappell, available for sale through the Four Sixes Supply House.