AN EQUINE LEGACY ABOVE ALL OTHERS

Captain Burnett had loved paint horses, and in the early years of the Four Sixes, he kept many of the paints on the ranch. He often said every spot on a paint horse was worth a dollar. The Indians he often visited and traded with agreed. However, in 1923, following Burnett’s death, all the stock horses were sold.

By the time George Humphreys took over as ranch manager in 1932, only a few horses remained on the ranch, and he assessed them as mostly old or worn out. With a vision to someday have the best horses in the country on the ranch, Humphreys started building a herd by purchasing 20 good broodmares. The first stud horse was a grey named Scooter, a gift from Tom Burnett, Captain Burnett’s only surviving son. Tom had seen the horse, out of a small Oklahoma sorrel racing mare, win a race and thought Humphreys could use him. However, Humphreys’s favorite stallion was ranch-raised Hollywood Gold (sired by Gold Rushes), born in 1940, that later became a prolific stallion in the cutting industry and brought top prices for breeding purposes.

During Humphreys’ 38-year tenure managing the Four Sixes, he purchased the race-bred stallion Cee Bars (sired by Three Bars), for $6,500. The first three years, Humphreys used only Four Sixes mares with Cee Bars and the stud’s offspring set many records for both racing and cattle work. Humphreys kept Cee Bars for seven years, then sold the horse for $15,000.

A formal decision was made in 1960 to develop an equine breeding program that has evolved to today’s exceptional operations that produces world-class American Quarter Horses used for ranch work, arena competition and on the racetrack. Of the early stallions, three had the most influence on the industry: Joe Hancock (sired by John Wilkins), Hollywood Gold and Grey Badger II (sired by Midnight) had the most influence.

In 1982 Glenn Blodgett, DVM, was hired by Anne Marion as the Horse Division Manager and charged with implementing a more intensive breeding management program that included the artificial insemination of all ranch mares and investing in ranch stallions which consisted of San Tip (sired by Peppy San) and Mr Rodeo Jack (sired by Two Eyed Jack). Another significant decision was to breed 10 mares, for three straight years, to the King Ranch’s legendary stallion Peppy San Badger, also known as “Little Peppy.” This course of action resulted in 30 live foals and had a lasting impact on the ranch’s breeding program that can still be seen today. Little Peppy’s influence on the Western performance horse industry is proven out by his sons that have sired the earners of more than $121 million, according to Equi-Stat, including Dual Pep and Peptoboonsmal. His daughters have so far produced more than $45 million and continue his legacy in the maternal lines of many great performance and ranch horses.

In 1983, Tenino Badger, a son of Peppy San Badger, was purchased from the King Ranch and, although he was one of a long list of foundation stallions, his influence on the Four Sixes Ranch breeding program was meaningful. When crossed on the matriarch of the ranch’s 99 broodmare band, Natural (sired by Coe Badger II), whose pedigree boasts some of the first horses Humphreys had incorporated into the lineage decades before—Grey Badger II and Cee Bars—the resulting foal named Natural Pick became one of the ranch’s best broodmares.

In 1998, Natural Pick was bred to Tanquery Gin (sired by Doc O’Lena) and the cross produced Sixes Pick, who was named the American Quarter Horse Association’s (AQHA) first World Champion Versatility Ranch Horse in 2008. The sorrel stallion now stands to the public at the Four Sixes Ranch.

In the early 1990s, while Strait Silver (sired by Quiksil Command) was in training with Bob Loomis, the gray stallion caught Dr. Blodgett’s eye: he was the right color, had good eye appeal, and felt he would cross on the ranch’s band of mares well. Over the years, the stallion was popular with breeders, like Ray Hunt, because he made nice all-around horses. They were good-minded and proved to have a broad scope of success in reining, roping, and barrel racing events. Unfortunately, there are no daughters or granddaughters left on the ranch, but you will find a few geldings that are great babysitters to the upcoming generation.

While working with Loomis, a six-time National Reining Horse Association Futurity Champion, another stallion caught Dr. Blodgett’s attention, Be Aech Enterprise (sired by Squaw Leo). He was a popular outcross at the time, and in 1991 the decision was made to breed the coveted Natural to his son Surprise Enterprise. The pairing produced Natural Enterprise. During his show career, he was the 1995 Southwest Reining Horse Association Open Futurity Champion with Craig Johnson in the saddle, finished top 10 in the 1996 AQHA World Junior Reining under Tim McQuay, and won the 1997 Fort Worth Stock Show National Reined Cow Horse Association Open Class Reserve Championship. This addition to the stallion roster benefited the ranch for many years, resulting in numerous exceptional geldings and broodmares. With the innovation of frozen semen, a few mares still get bred for the last owner of Natural Enterprise, Jerry Hodge, every year.

In 1994, the Four Sixes Ranch was honored with the AQHA Best Remuda Award for its outstanding working cow horses that tend to thousands of the ranch’s cattle. In an interview covering this prestigious award with the Quarter Horse Journal, Dr. Blodgett talked about leasing Tanquery Gin in 1991 from W.S. Morris III and was quoted, “That horse, in our opinion, produces an ideal ranch horse. We know what they will do. We know how to mate him on our mares and we’re going to use him extensively while we have him.

“He’s the type of horse that people will be talking about, like they talk about Hollywood Gold, Cee Bars, Gray Badger II, and Joe Hancock,” Blodgett added. “In the generations ahead, Tanquery Gin is going to have that kind of impact on our horses here at the ranch.”

He was correct, the stallion’s career was stellar, siring 178 money-earners of more than $2.3 million and 2,394 AQHA points, and his daughters have produced the earners of more than $3 million. He was purchased by the ranch in 1996 and was an instrumental part of developing the ranch’s renowned breeding program.

There is no doubt that the bloodlines of great stallions like Hollywood Gold, Cee Bars, Gray Badger II, Peppy San Badger, Tenino Badger and Tanquery Gin have made a major impact on the ranch’s remuda and that their influence is seen in western performance events and ranch programs across the country.

The following year the ranch stood three of the most valuable stallions the Quarter Horse industry had ever known, demanding the highest stud fees at that time—Dash For Cash (sired by Rocket Wrangler), Streakin Six (sired by Easy Six) and Special Effort (sired by Raise Your Glass (TB) the only horse to ever win the Kansas (now the Ruidoso), Rainbow and All American Futurities capturing the Quarter Horse Triple Crown in 1981. Combined, these three stallions’ get earned approximately $80 million and won nearly 200 stakes races.

Today, the Four Sixes Horse Division is directed by the ranch’s resident veterinarian, Nathan Canaday, DVM, and stands more than 40 of the top racing, performance and ranch Quarter Horse stallions found anywhere in the world.

From the early stallion influence of sires like Little Peppy and Tanquery Gin, to the strong mare lines still impacting the Western performance industry today. The Four Sixes, always at the forefront of the industry, breeds for an all-around useful horse that not only looks the part but has stamina, performs at the top level and is an exemplary example of the breed.

Many of the stallions are owned by other people, but managed by the Sixes, and many outside mares come and go. Modern technology allows for semen to be shipped, cooled, or frozen, to almost anywhere in the country, or even the world. A full line-up of veterinary services is also available to the general horse-owning public.

For more than 100 years, Four Sixes Quarter Horses have been carefully bred to have cow sense, speed, gentleness, correct conformation, and good looks. Some are kept for use on the ranch, others are trained for racing or performance competition, and some of the best are regularly consigned to several of the most prestigious auction sales in the United States, including the annual Return to the Remuda Sale hosted each Fall at the Four Sixes Ranch in Guthrie, Texas. 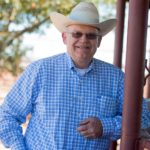 (December 21, 1948 – November 20, 2022) Blodgett was an award-winning veterinarian and long-time breeder of American Quarter horses. He received his bachelor’s degree in animal science from Oklahoma State University and his degree in veterinary medicine from Texas A&M University; he was recognized as an outstanding alumnus by both universities.

An active member of the industry, he began representing Texas as an American Quarter Horse Association (AQHA) director in 1991. In 2011, he was elevated to director-at-large, and in 2012 was elected to its Executive Committee—a five-person committee responsible for implementing important decisions made by AQHA members through the board of directors. He served on multiple committees and foundations over the years, and his impact on the industry was not unnoticed. In 2012 he received the AQHA Racing Council Special Recognition Award; in 2013, Dr. Blodgett was inducted into the Texas Hall of Fame; in 2017, he was awarded the Golden Spur Award by the National Ranching Heritage Center; in 2019, he was inducted into the Texas Cowboy Hall of Fame.

In 1982, Blodgett became the resident veterinarian and manager of the horse division at the 6666® Ranch, Guthrie, Texas, until his death in 2023. During his tenure at the 6666, the ranch became an AQHA All-Time Leading Breeder of Performance Horses and Race Money-Earners and Winners; in 1993, it won the AQHA Best Remuda Award, and in 2013, was named AQHA Racing Champion Breeder. The ranch’s foundation stallions included Joe Hancock, Hollywood Gold, Grey Badger II and Cee Bars. 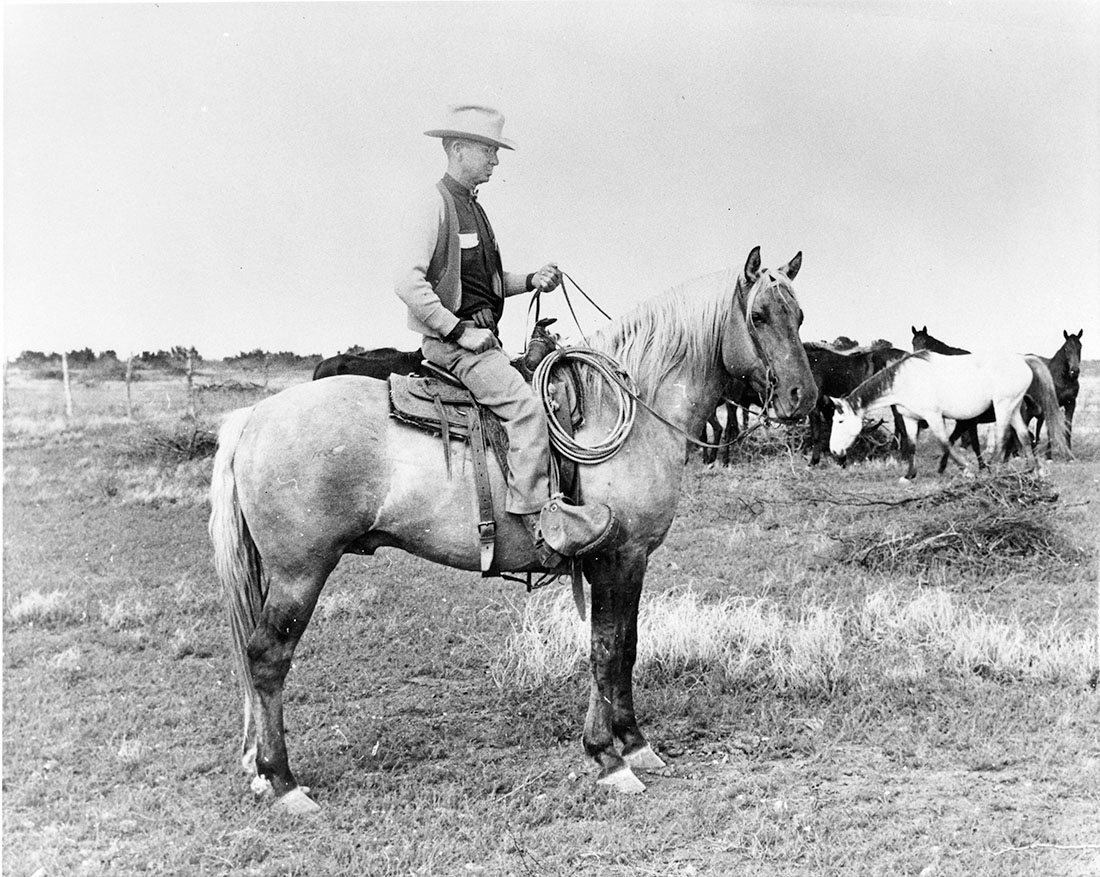 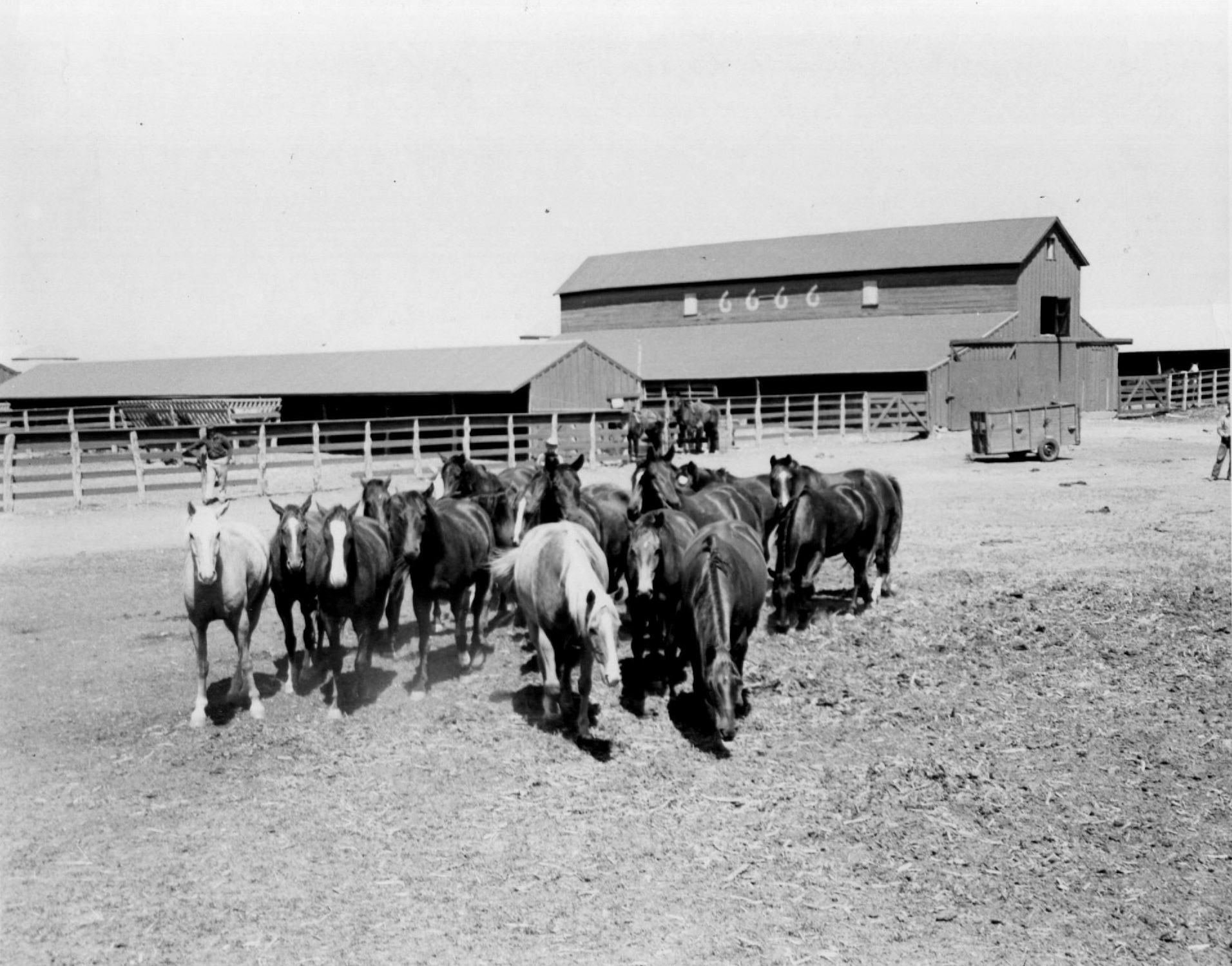 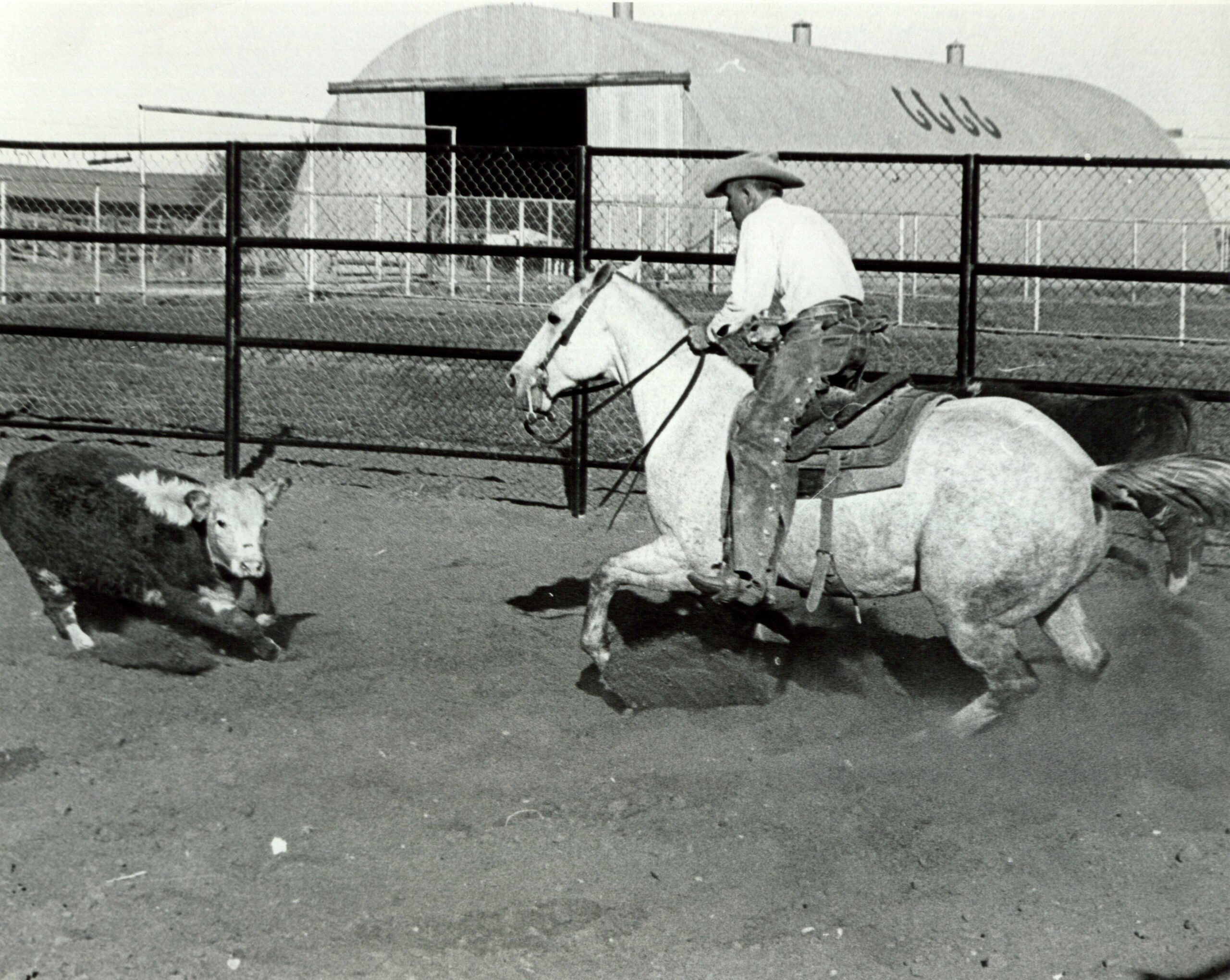 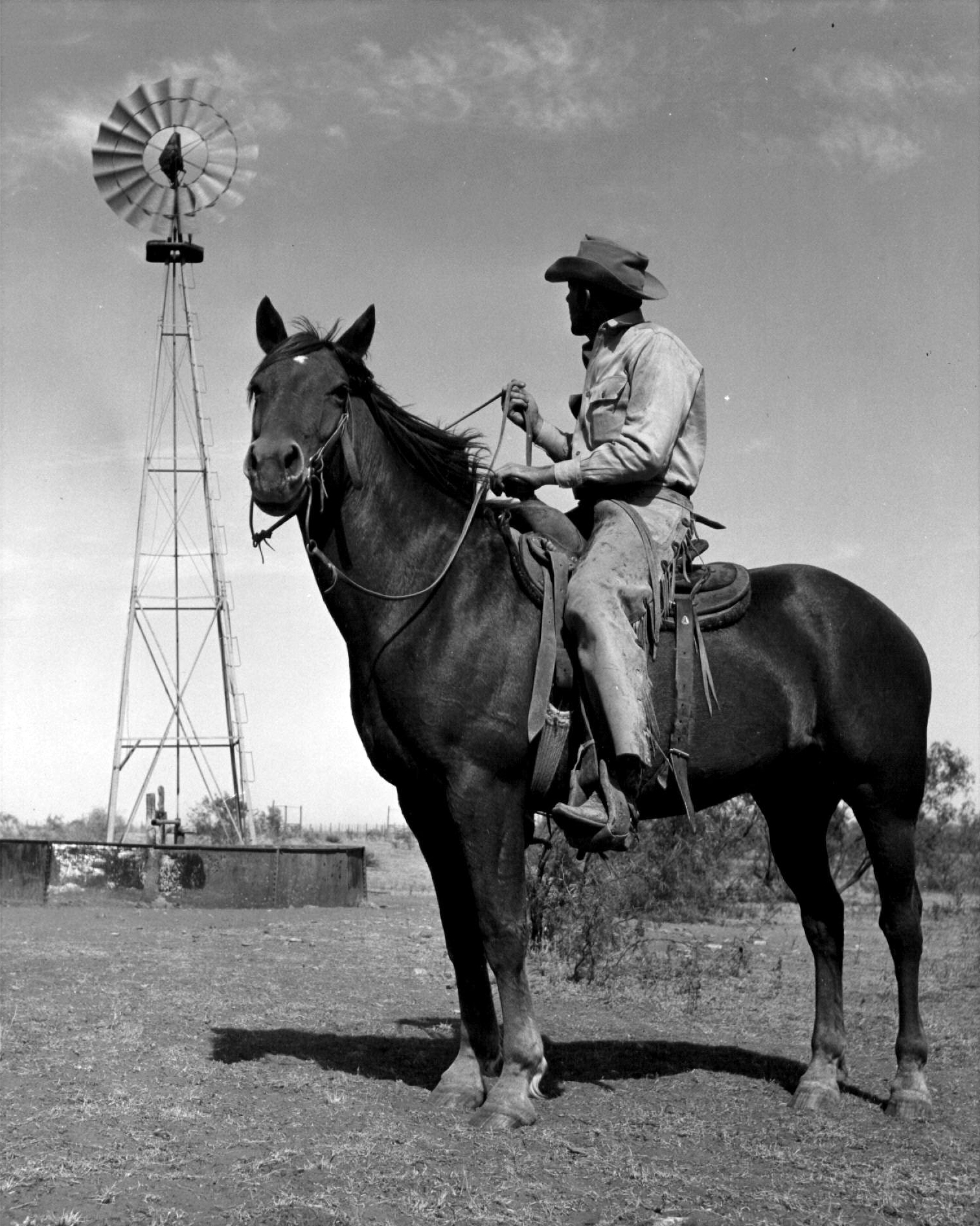 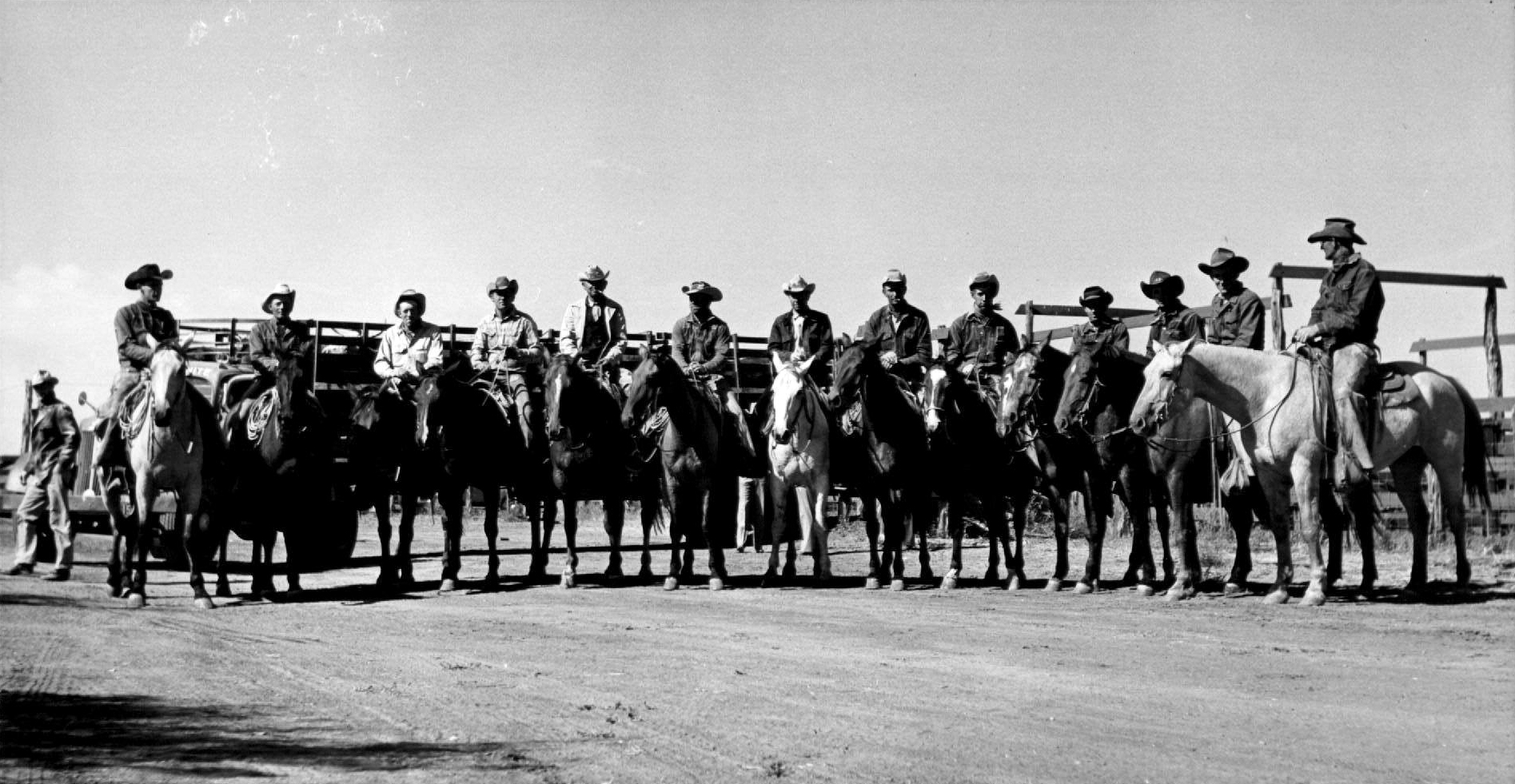 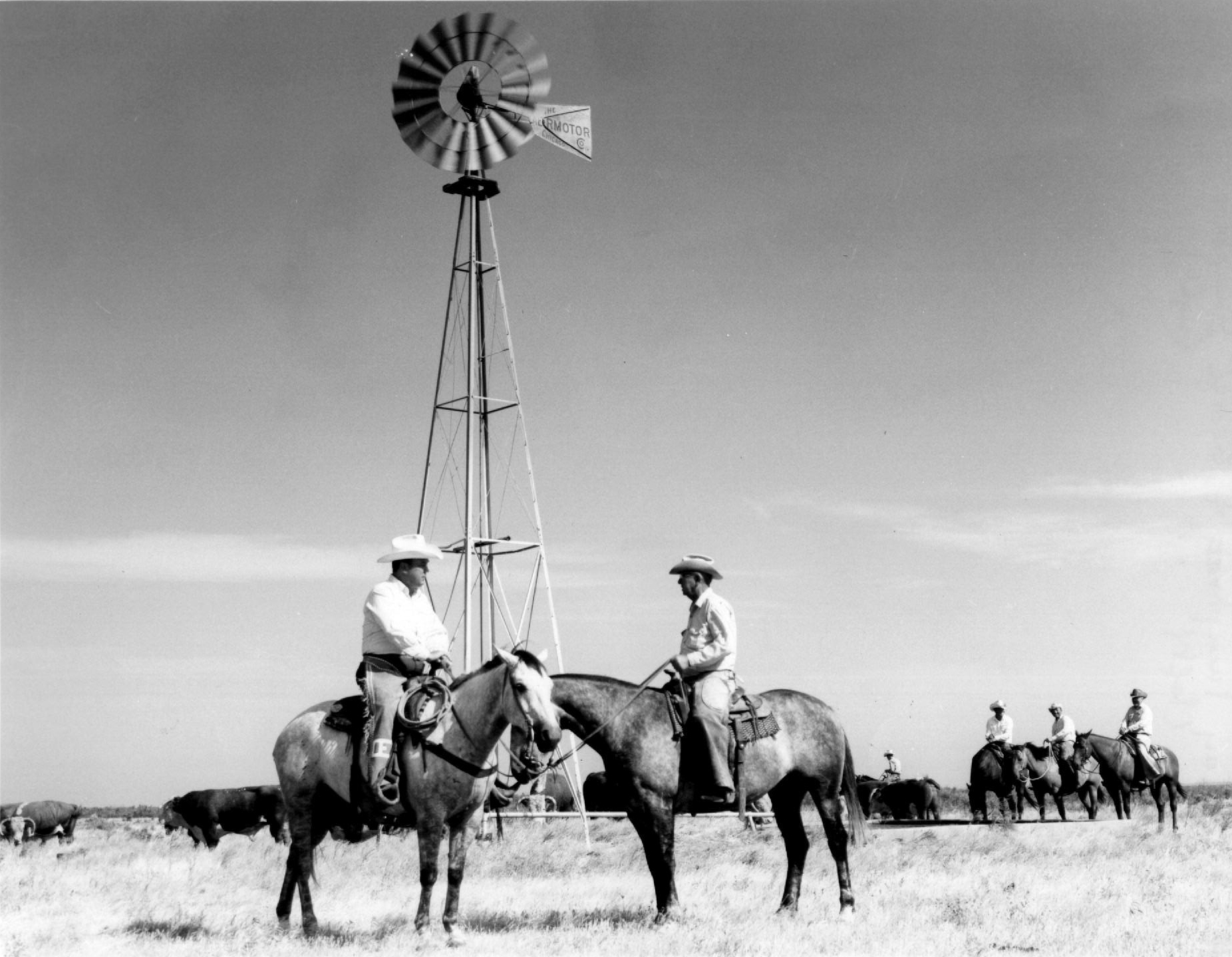